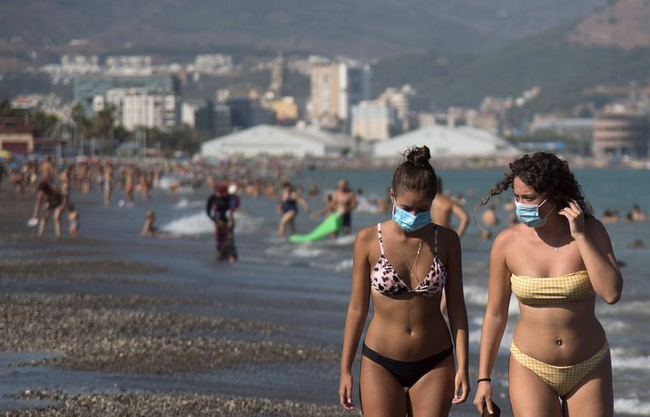 Update (1930ET): The US has officially surpassed 6 million coronavirus cases. While Brazil’s outbreak has slowed and India’s has accelerated, leaving both countries with roughly 3.5 million cases each (India is on track to surpass Brazil in the coming days), the US remains the undisputed COVID world leader, with a lead of more than 2 million confirmed cases.

As the NYT points out, it took 22 days for the US to go from 5 million to 6 million coronavirus cases, compared to more than 3 months for the US to reach 1 million cases after reporting its first case on Jan. 21. However, in a sign that the US outbreak truly is slowing, it took 16 days for the number of cases to climb from 4 million to 5 million. And new daily cases have been declining steadily since the end of July.

At last count, the US has just over 180,000 deaths. While deaths have once again been on the decline, the average number of deaths reported daily doubled in August compared with July.

In other news, FDA director Hahn’s assertion that the agency would be willing to approve a vaccine before clinical trials are complete – if the agency believed it was “appropriate” to do so – has infuriated the NYT, which is once again accusing Hahn of bowing before the politically expedient demands of the Trump Administration. Though Hahn did insist that “this is not going to be a politically motivated decision.”

By mid-morning on Sunday in the US, the number of confirmed cases reported worldwide surpassed 25 million, a psychologically important milestone, even though millions more cases have likely gone undiagnosed.

In other news, Dr. Stephen Hahn, the FDA chief who caught flack, then apologized, for granting emergency-use approval to a blood plasma-focused COVID-19 treatment favored by President Trump, told the FT that he would be willing to “fast track” vaccine approval. This comes just days after he assured Bloomberg reporters that the agency would “stick to the science” and that any approval would be “data based”. Speaking to the Times of London, a different British broadsheet, Dr. Anthony Fauci reiterated his claims that the US should expect a vaccine by the end of the year, possibly sooner, and that we should know whether candidates are “safe and effective” by November.

Dr. Anthony Fauci, director of the National Institute of Allergy and Infectious Diseases, said this weekend: “The way the pace of the enrollment is going on and the level of the infections that are going on in the United States, it is likely that we’ll get an answer by the end of the year.” He added, “It is conceivable that we would get an answer before that.”

“I would say a safe bet is at least knowing that you have a safe and effective vaccine by November, December.”

That’s good news, because America’s colleges have reported one COVID-19 outbreak after the next since the new semester began earlier this month. But as student newspapers castigate universities for “putting students’ lives at risk” (calm down kids), Bloomberg reports that a consensus is building among public health experts that it’s better to keep university students on campus following a COVID-19 outbreak rather than send them home, as many schools are – inexplicably – doing.

Over in Europe, Germany’s daily infections fell after a streak of rising numbers, but that didn’t stop its transmission rate – or “R” – from rising above the critical threshold of “1”. The Robert Koch Institute reported 709 new cases in the 24 hours through Sunday morning, pushing Germany’s total to 242,835, according to data from Johns Hopkins University.

That’s less than half of Saturday’s increase of 1,555. Germany registered more than 7,000 cases per day during the pandemic’s peak in the spring. Germany’s reproduction rate climbed to 1.04 from 0.94 the prior day.

After reporting another near-world record of new cases, India officially passed the 3.5-million case mark on Sunday, while its death toll exceeded 63,000. As India’s outbreak worsens, numbers in Brazil and the US continued to fall.