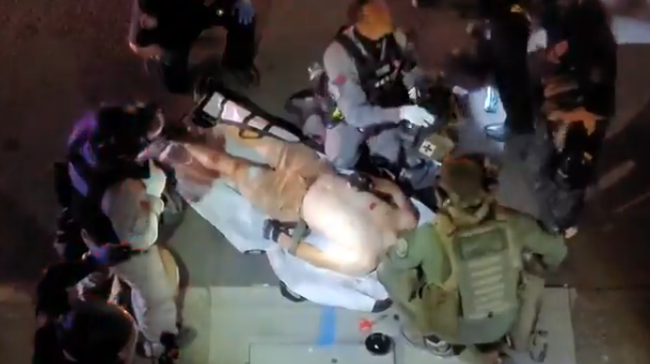 
A man was shot and killed in downtown Portland Saturday night as violence broke out all over the city amid clashes between a participants in a pro-Trump caravan and Antifa counter-protesters.

According to The Oregonian, police found “camouflage gear with infidel and thin blue line patches, which commonly indicate support for law enforcement.” According to the New York Times, he was “wearing a hat with the insignia of Patriot Prayer,” a right-wing group which has had frequent altercations with Antifa over the past several years. Eyewitness accounts suggest the shooter may be a black male.

(Real) Medics tried to save the shooting victim in downtown Portland. It is a white male contrary to what antifa journalists and accounts said about it being a black victim. pic.twitter.com/jzE2ffqN73

EXCLUSIVE: I can confirm it is a homicide. The person shot in downtown Portland is deceased.

Some witnesses are saying the suspect shooter is a black male. Police have not released an official suspect description.

Patriot Prayer founder Joey Gibson showed up to the scene of the shooting, and was promptly chased down the street by counter-orotesters. Gibson took refuge in a gas station.

Gibson has gone into a local gas station, protestors try to open the doors pic.twitter.com/Nb3d3iIsOA

Police move and move protestors away from the gas station pic.twitter.com/FJNnewoXcm

Earlier in the day, pro-Trump supporters and counter-protesters squared off. At one point, a man reportedly filming the license plates of conservative attendees was beaten. As he falls, you can see his arms fly straight forward in the ‘fencing response,’ suggesting possible brain damage. He was later interviewed speaking coherently, however.

As day turned to night, skirmishes continued between the factions.

Check back for updates…

A Look At Baby Doge Coin As The Crypto Prepares To Break This Pattern – Bitcoin (BTC/USD), Ethereum (ETH/USD)