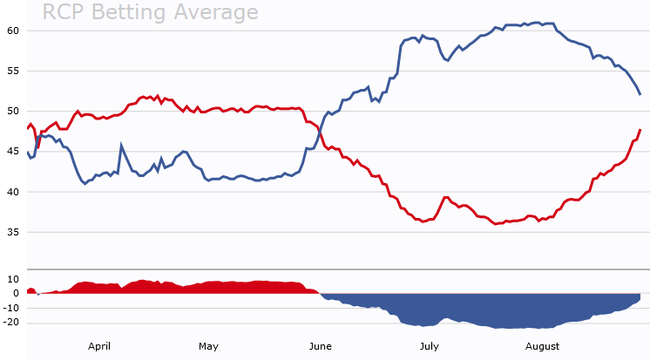 
President Trump received a healthy boost in support following the Republican National Convention, while enthusiasm former VP Joe Biden has slipped, according to a new poll by Morning Consult.

President Donald Trump needed a convention bounce — and he got one, emerging from the Republican National Convention with an improved standing against Democratic presidential nominee Joe Biden, fueled by gains among white voters and those in the suburbs, though he still trails the former vice president nationwide.

A new Morning Consult poll conducted Friday that asked 4,035 likely voters which candidate they would pick found Biden leading Trump by 6 percentage points, 50 percent to 44 percent. It marked a 4-point improvement from his standing heading into the convention on Aug. 23, when Biden led 52 percent to 42 percent. Friday’s poll had a 2-point margin of error, compared with a 1-point margin of error for responses gathered among 4,810 likely voters on Aug. 23. –Morning Consult

Keep in mind, nearly 12% of Trump supporters won’t admit to supporting the president (though many argue that figure is much higher), while just 5.4% of Democrats won’t reveal their preferences.

What’s interesting is that Biden received virtually no boost after the Democratic National Convention, while Trump’s numbers improved after the RNC. What’s more, fewer people tuned in to watch the Republican event.

The poll results come after a convention that was less watched than the Democratic National Convention a week before. According to The New York Times, an average of 19.4 million people watched the Republican gathering each night on live TV, compared to 21.6 million who watched the DNC; Trump’s acceptance speech was viewed live by 23.8 million, less than Biden’s 24.6 million the week before.

Perhaps pollsters will stop oversampling Democrats this time around to give the false impression Biden is hugely popular, as they did with Hillary Clinton in 2016. Then again, it might be a catch-22 if they dare to reflect actual support for Trump, or lack of faith in Biden.