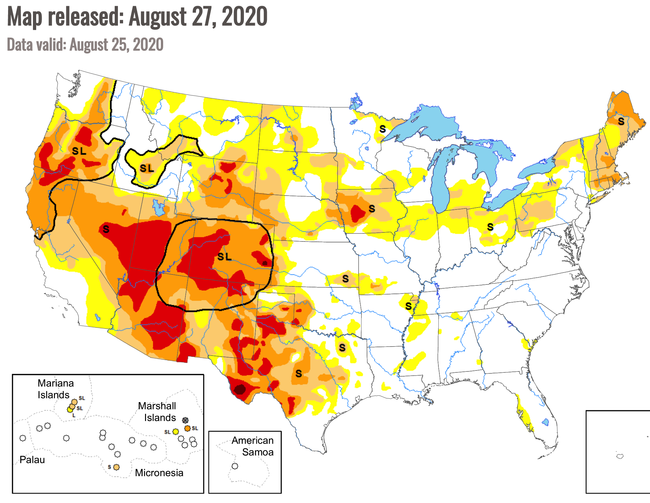 Much of the southwestern portion of the United States has been gripped by a drought that never seems to end, and there is a tremendous amount of concern that patterns that we witnessed back during the Dust Bowl days of the 1930s may be starting to repeat.

In a previous article, I discussed the extreme heat that we have been seeing in the region lately.  Phoenix has never had more days in a year when the high temperature has hit at least 115 degrees, and other southwestern cities have been smashing records as well.  At the same time, precipitation levels have been very low, and the combination of these two factors is starting to cause some major problems.

A couple of weeks ago, NASA posted an article on their official website about the horrible drought conditions that we are now witnessing…

As the United States moves into the last weeks of climatological summer, one-third of the country is experiencing at least a moderate level of drought. Much of the West is approaching severe drought, and New England has been unusually dry and hot. An estimated 53 million people are living in drought-affected areas.

Since NASA posted that article, things have gotten even worse.  If you go to the U.S. Drought Monitor website, you will instantly see why so many experts are deeply concerned.  The latest map shows that nearly the entire southwestern quadrant of the country is now gripped by either “severe” or “extreme” drought.  Needless to say, this is not good news at all for farmers and ranchers in the region.

Colorado is one of the states that is being hit the hardest.  At this point, more than 93 percent of the entire state is experiencing very serious drought conditions…

According to United States Drought Monitor, drought conditions have gotten significantly worse in Colorado in recent days and weeks.

Last week, approximately 72 percent of Colorado was experiencing “severe” drought conditions or worse. This has now jumped to just over 93 percent.

Because things have been so dry, it is really easy for the wind to pick up dust and start blowing it around, and this summer we have been seeing some really impressive dust storms.

Two dust storms converged over the greater Phoenix area on Sunday, hours after the city broke another record as a heat wave grips the West.

Thankfully, at this point we still have a long way to go before we return to the nightmarish conditions of the 1930s.  The “Black Sunday” dust storm that so many history books talk about was actually 1,000 miles long, and it traveled at speeds of up to 100 miles an hour…

A month later, one of the most severe storms of the era, nicknamed “Black Sunday,” enveloped the Great Plains. It was 1,000 miles long, contained 300,000 tons of dust, and traveled up to 100 miles per hour. This weather didn’t just affect the land: Farm animals choked on dust and suffocated. At least 7,000 people died from “dust pneumonia” as a result of breathing in the fine particulates, and countless more were driven from their homes and livelihoods by the endless, swirling dirt.

Let us hope that we don’t see anything like that any time soon, but scientists are using the term “megadrought” to describe what the southwestern portion of the country is currently going through…

The western United States and parts of northern Mexico have been suffering through drought conditions on and off since the year 2000 – and unfortunately it may not let up any time soon. A new study has examined extreme droughts in the region dating back 1,200 years, and found that the current conditions have the makings of a “megadrought” that could last decades.

In fact, the lead author of that study is actually telling us that the current drought is “on the same trajectory as the worst prehistoric droughts”…

“We now have enough observations of current drought and tree-ring records of past drought to say that we’re on the same trajectory as the worst prehistoric droughts,” said study lead author A. Park Williams, a bioclimatologist at Columbia University, in a statement. This is “a drought bigger than what modern society has seen.”

Ultimately, the experts don’t know how long this new “megadrought” will last.

It could theoretically end next year, or it could persist for the foreseeable future.

But if it continues to intensify, it is going to become increasingly difficult for farmers and ranchers to make a living in the affected areas.

In addition, supplies of fresh water are going to become increasingly stressed.  The once mighty Colorado River is now so overused that it doesn’t even run all the way to the ocean anymore, and experts are deeply concerned about the future of the river.

In the end, this “megadrought” may force dramatic changes in cities all over the region.  Sadly, things have already gotten so bad that you can see the impact of the drought “everywhere”…

Those that have been following my work for many years know that I have been watching developments in the southwestern quadrant of the country for many years, and things have really started to escalate here in 2020.

What a crazy year this has been.  We are still dealing with a global pandemic, 58 million Americans have filed for unemployment over the past 23 weeks, civil unrest continues to rage in our major cities and major politicians are being chased down the street, and this month we have been hit by one natural disaster after another.

Now a presidential election is rapidly approaching, and many people believe that what we have experienced so far is just the beginning of our problems.

Without a doubt, our world seems to be going absolutely nuts, and that should deeply alarm all of us.