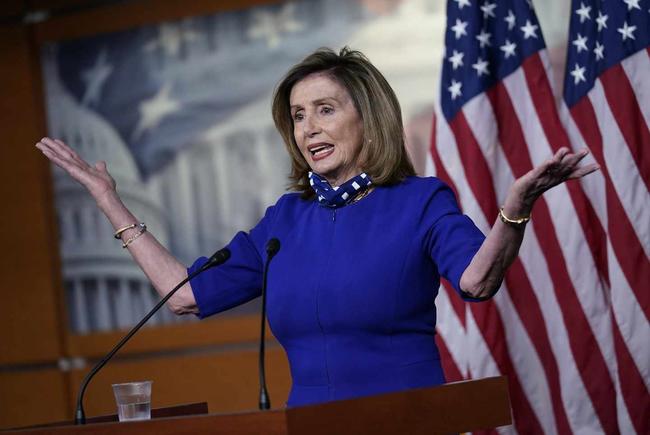 Taxpayers of America, you may soon be funding a $500 billion bailout of the 50 states, all U.S. territories, and the District of Columbia. But where is this vast sum of money going?

At OpenTheBooks, our goal is transparency. We are nonpartisan. We believe you, the American taxpayer, should be able to access every government expense — local, state, and federal — in real-time on your mobile phone, iPad, and computer. It’s your money. You deserve to see where every dime is spent. We have posted 5 billion government expenditures online.

Last year, we filed 41,500 Freedom of Information Act requests. We documented the salaries and pensions of 23 million public employee. We sued three states that refused to give us information about how they spent your money.

Here are a few of the unlimited examples in just four “deep blue” Democratic areas — California, New York, and Illinois, along with Washington, D.C.

Here you can see how your tax dollars are wasted, which the Pelosi Bailout Bill conveniently overlooks, and why blank checks are unwise even during an economic crisis.

In the so-called Golden State, 341,000 state and local government employees earn more than $100,000 in salary or pension payments. If the cost of living in California necessitates such salaries, the state should tackle local government policies designed to keep housing prices high. Or begin taming the public employee unions, whose bargaining helped 44 lifeguards in Los Angeles County earn between $300,000 and $365,000. Not to mention the $501,000 per year nurse working for the university medical system.

Members of San Francisco’s Board of Supervisors are also generous to themselves, but these public servants didn’t earn their steady raises by running a tight ship. According to the state controller’s government compensation website, over a five-year period from 2013 to 2018, the amount that San Francisco paid out in total wages jumped 27.6%, from $2.9 billion for 35,771 employees to $3.7 billion in total wages to 40,951 employees in 2018.
Among the new hires: The members of “poop patrol,” who are paid $184,000 a year to clean up human waste left by the city’s burgeoning homeless population. (Feel free to add your own wisecrack here.)

However, it’s no laughing matter, and it’s not strictly a local problem: Pelosi, who came of age in San Francisco politics, and Gov. Gavin Newsom, who was born and raised there, aren’t looking to local politicians to tighten their belts or enact smarter policies. Both are looking for Washington to simply bail out the city, along with the rest of the state. California would reap $48 billion from the Pelosi Bailout Bill – nearly a dollar-for-dollar bailout of its highly compensated employees.

New York’s General Assembly is not to be outdone. They recently hiked their own pay to $130,000. They are now the most highly compensated legislators in the country. Plus, 21 current representatives and state senators are double-dipping, which means they not only voted to increase their salaries, but they also they collect a salary and a pension at the same time from their same position.

In the Land of Lincoln, a place where a young store clerk and future president once walked three miles to return six cents change to a woman he’d inadvertently overcharged, some 110,000 public employees are paid salaries or pensions in excess of $100,000. Under the Democrats’ plan, Illinois will reap $20 billion in bailout money. Despite launching the political career of “Honest Abe,” in our time Illinois is a cesspool of corruption. As a consequence of its Faustian bargain with public employee unions, the financially strapped state is flirting with junk bond status.

There, in the American heartland, Chicago’s city-employed tree trimmers make $106,663 and state correctional facility nurses take home up to $277,100. Higher education is a particularly lucrative endeavor of public service: Illinois community college presidents get nearly half-a-million dollars a year, while university doctors are compensated at packages ranging up to $2 million annually. At the state’s signature public university, the head football coach is paid $4 million – for fielding a losing team.

Thanks to such largesse, every man, woman, and child in Illinois owes $19,000 of the estimated $251 billion pension liability. An Illinois family of four now owes more in unfunded pension liabilities ($76,000) than they earn in household income ($63,585).

The elected leaders in the nation’s capital are lobbying for a $3.2 billion bailout. But if Congress took only a cursory look, they’d see plenty of places to cut the fat. It starts at city hall, were the mayor’s $220,000 annual pay exceeds that of every governor in the country.

And so it goes: the D.C. Department of Parks and Recreation chief is paid $10,000 a year more than the secretary of the U.S. Department of the Interior, who manages one-fifth of all the land in the country.

Some “Heroes Act.” Heroes to whom? Certainly not you, the taxpayers.

Half a billion here. Half a billion there. The federal debt continues to explode. It has quadrupled in the last 20 years. Today, has surpassed $26.6 trillion and is rising rapidly. The deficit this year is unknown. It will be somewhere around $4 trillion, the equivalent of a wartime deficit. The entire federal debt in 1992 — after 216 years, two world wars, depressions, countless natural disasters — was $4 trillion.

The Pelosi state bailout bill clearly screams, “So what? It’s not my money.” By the time our country’s debt becomes so corrosive to your livelihood, to your life, that it can’t be ignored — as it will — Pelosi and the big spenders in both major political parties will be long out of office.

Call your congressional representative. Call your senators. Tell them it is time they demonstrated with actions, not just words, that they are acutely conscious that they are spending your tax dollars. Tell them you are absolutely opposed to bailing out states that waste money with no fiscal sense and no care for future generations of Americans.

Adam Andrzejewski is the CEO/founder of OpenTheBooks.com, dedicated to posting all government spending online.