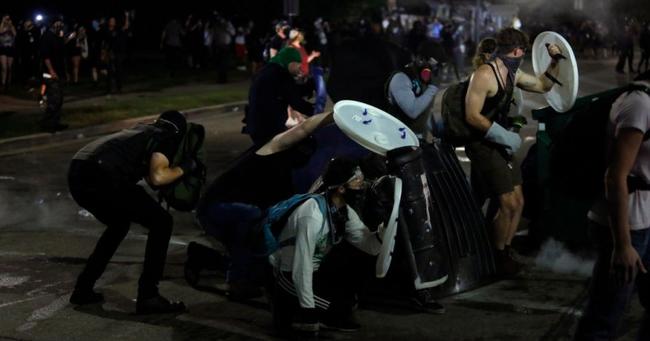 As riots and unrest continue to dominate the headlines, a new poll has found that almost as many American voters now view violent crime as an important election issue compared to coronavirus, something that is likely to help President Trump.

While cities like Portland have seen riots on a nightly basis for a virtually unbroken time period, the mayhem has now spread to Kenosha, Wisconsin, where two people were fatally shot last night.

The bedlam is now reflected in the polls, with Americans becoming increasingly concerned about law and order.

“A sizable 59 percent of voters in the survey indicate that violent crime, which President Trump has framed as happening in Democrat-controlled cities, is a “very important” factor in casting their ballots,” writes Rusty Weiss.

He cites a Pew poll which found that coronavirus has dropped to the fourth most important issue with 63 percent concerned.

“A new Pew survey found that violent crime is now the fifth-most important issue for votes, with 59% listing it as ‘very important’ to their vote. For context, it’s nearly as important to Americans as the coronavirus, which ranks fourth with 63%”https://t.co/25M33A3GVy

When broken down along party lines, 74 percent of Trump supporters view violent crime as an important issue compared to 46 percent of likely Biden voters.

As we highlighted earlier, CNN host Don Lemon appears to be worried that the relentless riots and unrest that have plagued American cities for the last three months are aiding Trump.

“I think Democrats are ignoring this problem or hoping that it will go away…Joe Biden may be afraid to do it…He’s got to address it. He’s got to come out and talk about it,” said Lemon.

A CNN poll taken earlier this month also found that Biden’s lead over Trump had dropped 10 points since early June.

Meanwhile, the public’s diminishing concern about coronavirus also appears to be helping President Trump’s approval rating in the polls.

A new poll released today that was taken immediately after the DNC found that “Trump had a 48% approval rating and a 52% disapproval rating among likely voters in Arizona, Florida, Michigan, North Carolina, Pennsylvania, and Wisconsin.”

This compares with a 46%/54% approve/disapprove split two weeks ago, when fears about COVID-19 were slightly higher.