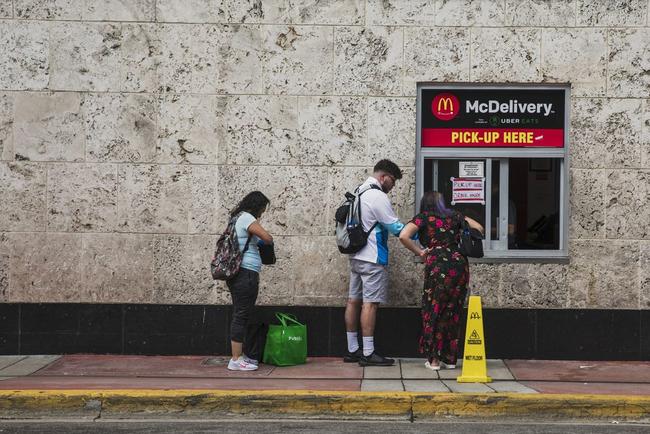 
At time when the US restaurant sector is suffering from a crisis of unprecedented proportions, with diners in US restaurants roughly half where they were compared to a year ago due to ongoing covid lockdown measures…

… a new crisis has emerged: a persistent labor shortage despite the greatest jump in unemployment in 80 years.

The reason why the this time is indeed different from previous economic slowdowns when restaurants offered an important lifeline for the newly unemployed and would always be packed with minimum wage workers is because the Covid-19 pandemic has left service-sector jobs with a higher chance of infection; as a result even higher wages aren’t luring workers into the kitchen.

According to Bloomberg, key restaurant labor demographics such as teenagers, at the urging of their parents, and the elderly, are staying away for health and safety reasons, and emergency-enhanced unemployment checks have kept others on the sidelines.

And while many restaurant chains are finally paying more – or so they claim – that has failed to fill current their staff openings.

“This is the most dramatic shift that’s happened in the modern history of food service” said Aaron Allen, chief strategist at restaurant consultancy Aaron Allen & Associates. “It’s the first time people have left the industry and decided not to come back.”

According to the latest BLS Jolts report, as of mid-July, only about half of the 6.1 million food-service jobs that the U.S. lost in March and April had returned. This is a U-turn from early in the pandemic, when restaurant chains pared menus, reduced store hours and cut staff.

Not everyone is suffering: while many traditional restaurants continue to struggle as consumers avoid dining rooms, fast-food chains and those with carryout have reported steady improvement this summer as socially distancing consumers opt for drive thrus, Bloomberg reports. At the same time, delivery-focused companies like Papa John’s and Domino’s Pizza have thrived.

In June, McDonald’s said that in order to capitalize on the rebound in fast food, it planned to hire 260,000 this summer. Subway, Taco Bell, Dunkin’ Brands Group Inc., Papa John’s and Chipotle are also looking to expand payrolls on a smaller scale. But the lack of workers is complicating efforts.

That said, the lack of teenage workers – who would rather sit at home and daytrade the “market” – is good news for others as it has meant mostly higher wages:

Michael Lippert, president of GPS Hospitality LLC, which operates almost 500 Burger King, Popeyes and Pizza Hut locations, said hiring has been particularly tough because fewer teenagers are applying. This has pushed up wages and led the company to expand overtime, previously reserved for management, to hourly workers. Last week, the company held a virtual job fair, with a target of hiring 3,000 workers.

“The economic environment likely is not going to change. If it does, I don’t know that it will improve,” he said. “I think the labor force will remain tight for the next several months.”

And speaking of higher wages, Flynn Restaurant Group, which operates Taco Bell, Arby’s and Applebee’s locations, said it’s paying hourly workers more than it did a year ago at its 280 Taco Bell restaurants.

While keeping restaurants fully staffed has always been difficult, “the uncertainty around Covid has made this even more of a challenge,” said Greg Flynn, the company’s founder and chief executive officer. He added the task remains daunting in spite of high jobless rates and economic contraction.

Some more good news: Wendy expects 4% wage inflation for the year, double the Fed’s newly revised “target.” The higher wages are “what you need to pay at the moment on a year-over-year basis to actually staff your restaurants,” said Gunther Plosch, the company’s chief financial officer, on Wendy’s second-quarter earnings call on Aug. 5.

Yet an odd, if symmetric, wage inelasticity has emerged: whereas previously restaurants offering minimum wage would always be fully staffed, this time higher pay is suddenly insufficient for workers like Alonzo Rice in Orlando, Florida. A former Burger King cook and member of the Fight for $15 campaign to increase restaurant wages, Rice has been working odd jobs since his restaurant hours dwindled and then disappeared altogether amid the pandemic. With government benefit ending, he’s now once again starting to apply for jobs, but his old line of work just isn’t worth the risk, he said.

“I’m not applying to any restaurant jobs.”

Maybe… but when the money runs out and Alonzo is desperate to pay next month’s rent, he will, and so will everyone else once the full gamut of fiscal stimulus fades at which point wages will tumble once again.