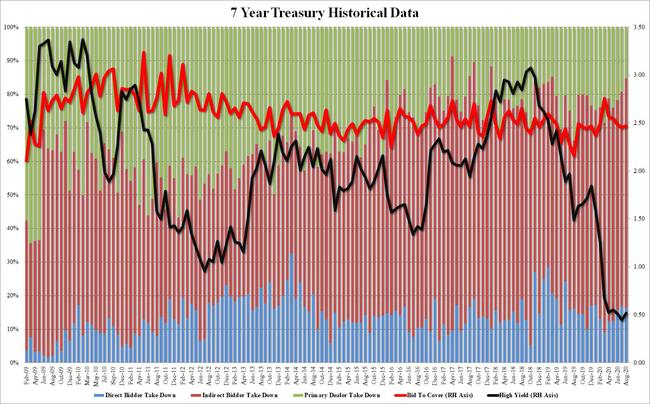 
After two monster auctions earlier this week, when demand for both the 2 and 5 Year auctions was off the chart, moments ago the Treasury sold another record-sized auction when it placed $47 billion in 7 year paper, up $3 billion from last month, and which like the last two was met with impressive demand.

Thanks to the concession following today’s selloff across the curve, the high yield in today’s auction once again stopped through the When Issued, pricing at 0.519%, 0.8bps through the WI.

The Bid to Cover, unlike the week’s prior auctions, was strong but not remarkably so, and at 2.472 was just above last month’s 2.449 but below the six auction average of 2.55.

The internals were better, with Indirects taking down 68.03%, not only well above the recent average of 63.7%, but the highest since November. And with Directs taking down 16.4% of the auction, virtually unchanged from last month, Dealers were left with just 15.3%, far below the six-auction average of 23.1% and also the lowest since March of 2019.

Overall, this was another stellar auction, this time on the belly of the curve, and judging by the impressive demand it was the latest indication that the Fed’s message that no rate hikes are coming any time soon, was heard loud and clear by the market.