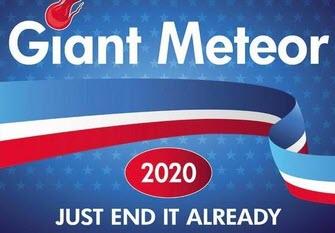 
In an event that is almost guaranteed to be called Russian meddling if President Trump wins re-election, an asteroid is expected to zoom “uncomfortably” close to the Earth the day before election day.

Celestial object 2018 VP1 is expected to fly past earth on November 2, 2020 according to the Center for Near Objects Studies at NASA’s Jet Propulsion Laboratory and a new report from Fox.

The asteroid is “very small” and has an orbit that crosses the orbit of Earth. So far, computer simulations predict that there will be no collision.

Hopefully, these aren’t the same computers that predicted Hillary Clinton having a 90% chance of winning the 2016 election.

The asteroid orbits the sun every 731 days and is said to be roughly the “size of a school bus” or smaller. The Center for Near Objects Studies says there is just a 0.41% chance of it entering the Earth’s atmosphere “based on 21 observations spanning 12.968 days.”

Even if it does enter the atmosphere, it’ll burn up due to its small size, the group says. But hey, we can still hold out hope!

Asteroid 2018VP1 is very small, approx. 6.5 feet, and poses no threat to Earth! It currently has a 0.41% chance of entering our planet’s atmosphere, but if it did, it would disintegrate due to its extremely small size.