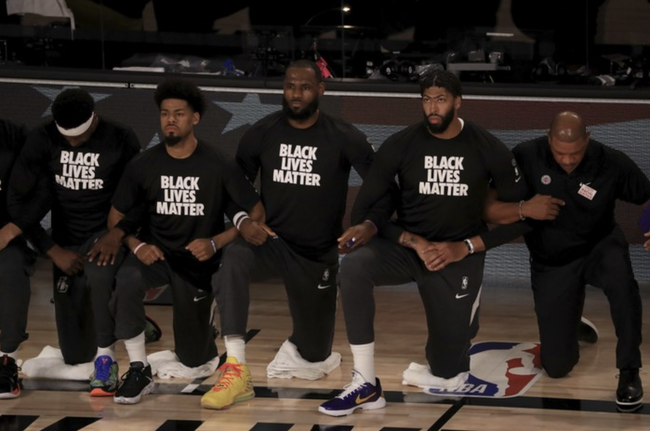 
Despite last night’s announcement from the DoJ that Jacob Blake had a knife stashed in his car, bolstering the officers’ claims that he appeared to be reaching for the weapon when he was shot, NBA players are ready to scrap the whole season as they’re swept up in yet another protest movement for “social justice”.

As we recounted yesterday, it all began Wednesday afternoon when the Milwaukee Bucks (the team closest to Kenosha) announced that the team would be boycotting Game 5 of its first-round playoff series against the Orlando Magic. After they moved, the rest of the league swiftly followed as players scrambled to evade the wrath of the ‘cancel culture’ police, ready as ever to brand any who resist with the scarlet letter of “insufficient woke-ness.”

A late-night meeting between players, coaches and the league ensued, and according to Deadline Hollywood, it didn’t go nearly as well as the owners had probably hoped. The Los Angeles Lakers and Los Angeles Clippers (which still carries the stain of having once been owned by a man outed as a notorious racist) both reportedly voted to end the season without continuing.

Since most NBA players are working men who are operating under the same financial pressures as ordinary people (though they lack the platform of somebody like a Lebron James), the rest of the teams in the league pushed back, arguing that the season should be allowed to continue.

According to Deadline, the end result is that the meeting “failed to reach a consensus” (whatever happened to a majority or super-majority?) and thus the fate of the 2020 post-season is still in jeopardy.

Of course, this isn’t the first time the league’s star players have tried to scuttle the season in the name of “social justice” (preserving their brand). Before teams arrived in the Orlando, Florida “bubble” where they’ve been playing, Brooklyn Nets superstar Kyrie Irving moved to try and boycott the rest of the season (of course, some pedantic leftists are really out there on twitter arguing that the proper terminology is a “strike” not a boycott).

It’s a strike, not a boycott. Words have meaning.

Lol. Since when? But we digress…

Despite Irving’s efforts, the NBA players decided to forge ahead.

But now that the players have been locked up for weeks with their WAGs on restriction and a raft of eliminations coming soon, understandably, the mood has probably shifted somewhat. Still, the majority appear to still support continuing on with the post-season.

LeBron James reportedly walked out of last night’s meeting, prompting the rest of the Lakers players to leave with him.

Sources: Miami’s Udonis Haslem spoke and essentially told everyone in room that — without Lakers and Clippers, how will season continue?

LeBron James walked out. Rest of Lakers and Clippers exited behind him.

Because in contemporary America, it’s not enough to be a sports legend. You need to be an activist, a designer, a speaker, an author and a politician, too.

Of course, the financial repercussions should the season be cancelled will undoubtedly total into the billions, and with the league likely to reject the player’s collective bargaining agreement if the season falls through, it could leave the league with a lockout on its hands as we head into next season.