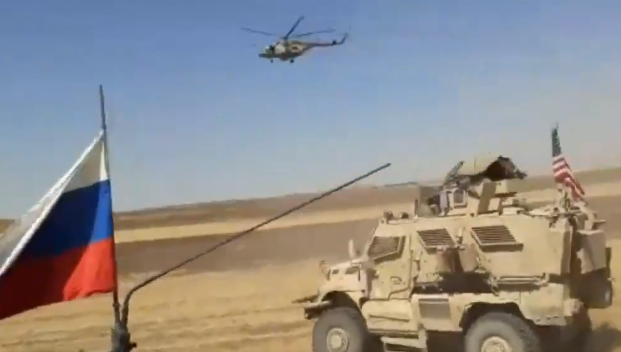 
Dramatic video which emerged Tuesday shows the latest “close call” between US, Russia, and Syrian national forces who are jostling for control of northeast Syria, after a prior incident resulted in a rare exchange of fire at a Syrian Army checkpoint, killing two Syrian soldiers.

The Pentagon is reporting multiple US troops injured with what are being described as “concussion-like injuries” as a result of collisions with Russian armored vehicles.

The footage is being widely reported as showing Russian Army vehicles and even a chopper giving chase to an American armored convoy in northeastern Syria.

In the new episode of “The Hunger Games in #Syria” that set #Russia/n & #US troops on a collision course, military patrols of 🇷🇺 & 🇺🇸 face off reportedly near Al-Malikiyah & engage in mutual push-and-cut-off provocations, RUS even use choppers for bigger intimidation pic.twitter.com/PxVyXd7MgL

And further videos, one apparently taken from one of the Russian vehicles, confirm that Russian military forces were involved.

The close-up view reveals just how close the two rival parties were during the standoff, further suggesting they were a single gun shot away from a direct battle.

U.S. and Russian troops have a tense encounter in northeastern Syria.

Another video from the incident pic.twitter.com/qVvHbZ1SJb via @RALee85

And here’s the account of Beirut-based al-Masdar News, which is known for having reporters on the ground and sources within the Syrian Army:

The Russian army was filmed on Tuesday, chasing U.S. military vehicles traveling through the Al-Hasakah countryside in northeastern Syria.

According to field reports from northeastern Syria, Russian army vehicles, along with one of their choppers, was seen chasing U.S. military vehicles near the border-city of Al-Malikiyah in the eastern part of Al-Hasakah.

At least two videos of the incident were released on Wednesday, both showing the Russian army attempting to intercept the U.S. military vehicles in the Al-Hasakah countryside.

This latest incident underscores that though the Syria conflict has long been out of international headlines and media coverage, the potential for superpowers entering direct conflict there remains high as ever.

The cat and mouse game continues between Russians and Americans in Hasakah. pic.twitter.com/hin0gP7EeQ

Currently US forces still occupy a large chunk of northeast territory in support of Syrian Kurdish militias as part of Trump’s controversial “secure the oil” policy. Indeed Damascus has repeatedly accused Washington of straight up theft, which the US administration has not even really attempted to deny.