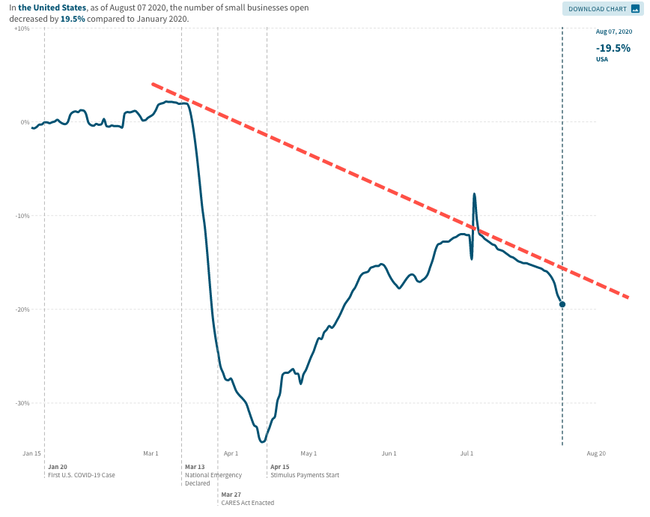 The slump coincides with an overall economic recovery that stalled in late June. About a month ago, we said rapid and record fiscal stimulus, driving the V-shaped recovery in consumer spending, was at risk of losing momentum if government support was removed prematurely (see: “Look Out Below”: Why The Economy Is About To Fly Off A Fiscal Cliff“).

With a fiscal cliff beginning on August 01, many states paused or reversed reopenings because of a reemergence of the virus, fiscal uncertainty remains about how and when the next round of Trump checks will be helicopter dropped to tens of millions of jobless and broke Americans, and an overall economic recovery that is reversing, the weakest companies, many of which are small firms, are closing up shop once more.

We outlined in late July how small business owners were rushing to liquidate their assets on Facebook Marketplace as the environment to operate worsened. The devastation of small firms is shocking, due mostly because mom and pop shops account for 44% of all US economic activity.

Opportunity Insights shows the percent change in the number of small businesses open tumbled from -7.7% on July 4 to -19.5% on August 7.

The decline was widespread, seen in every state.

A heat map shows the percent change in the number of small businesses open suffered the most significant decline in the Northeast.

On Wednesday, the Federal Reserve was cautious in the minutes and questioned the robustness of the economic recovery.

Since small firms are the lifeblood of the US economy, with many now closing for a second time, this can no way suggest a “V-shaped” economic recovery will be seen this year or early next year.

Wall Street misread the shape of the recovery curve thanks to the Federal Reserve and the federal government pumping trillions of dollars into the economy market.