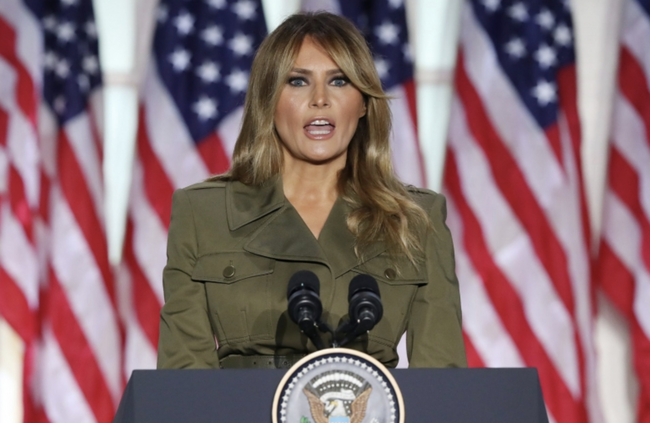 
Night 2 of the Republican National Convention picked up right where Night 1 left off, with speeches from First Lady Melania Trump, Secretary of State Mike Pompeo, along with a few less familiar faces, including Covington Catholic student Nick Sandmann and pro-life activist Abby Johnson.

Trump kicked things off by issuing a full pardon to  convicted bank robber-turned-activist Jon Ponder, who helps former inmates move on from crime, while Trump and Acting Homeland Security Secretary Chad Wolf (nominated earlier to fill the role on a full-time basis, pending Senate confirmation) also conducted a surprise naturalization ceremony for five newly minted US citizens, eliciting howls of rage from Democrats who accused Trump of abusing his “official capacity” to boost his campaign. But while the president’s actions might seem egregious, all presidents running for reelection have leveraged the powers of the office to varying degrees.

Shaking off a flurry of taunts from the mainstream press about last year’s plagiarism incident, First Lady Melania Trump delivered last night’s keynote, highlighting her “Be Best” anti-bullying campaign and speaking out against looters committing acts of violence under the cover of “peaceful protests”.

Covington Catholic Student Nick Sandmann (best known for a “confrontation” with a Native American activist, according to the NYT’s hilariously sanitized description) also delivered a speech in front of the Lincoln Memorial where he blasted cancel culture and the media for “willingly” spreading false narratives about the “confrontation” that the NYT alluded to (Interestingly, the NYT made no mention of Sandmann’s settlements with the mainstream media orgs who defamed him).

Abby Johnson described her transformation from Planned Parenthood employee to the founder of And Then There Were None, a nonprofit dedicated to ending abortion in the US.

In keeping with Trump’s agenda, farmers and small business owners from the Midwest featured heavily in the night.

Finally, Secretary of State Mike Pompeo addressed the convention from the American embassy which Trump moved to Jerusalem. Pompeo’s address infuriated Dems, drawing accusations that the Trump Administration had broken with decades of precedent, and possibly federal law, by devoting official resources to campaigning. But as always, the mainstream press failed to understand that these accusations help Trump as much as hurt him, at least in the eyes of the campaign.

“The primary constitutional function of the national government is ensuring your family – and mine – are safe and enjoy the freedom to live, work, learn and worship as they choose,” Pompeo said. “Delivering on this duty to keep us safe and our freedoms intact, this president has led bold initiatives in nearly every corner of the world.”

Tomorrow, we move on to Night 3 – that is, if Democrats don’t successfully impeach Trump and Pompeo for the Jerusalem “stunt” – which of course highlighted the Israel-UAE diplomatic agreement that now stands as one of the administration’s greatest foreign policy accomplishments – by the time the first speaker starts.