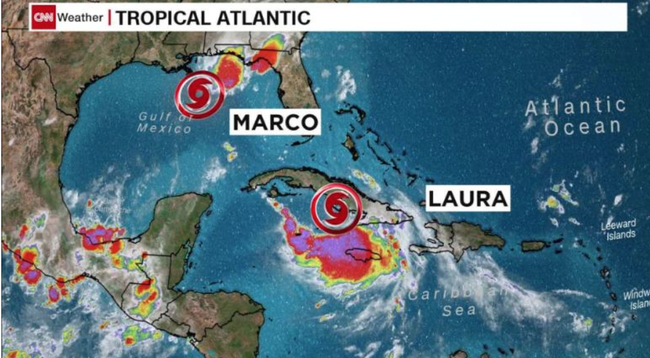 
Two tropical storms, Marco and Laura, are traversing the Gulf of Mexico Monday morning with both expected to make landfall in Lousiana early this week.

According to the National Hurricane Center (NHC), Marco, which strengthened Sunday to a Category 1 hurricane, weakened in the overnight with sustained winds of 70 mph, just under the threshold of hurricane status. Marco will make landfall on the Louisiana coast on Monday night or early Tuesday morning.

Laura was dumping torrential rain on Cuba and Jamaica on Monday morning. The storm is expected to trigger mudslides and urban flash floods in both countries. The death toll in the Dominican Republic and Haiti was at least 11 over the weekend following tropical storm conditions.

Laura’s long-range track and intensity remain uncertain as the storm is expected to make landfall somewhere between Louisiana and Texas coastlines by Wednesday.

“The unprecedented kind of thing here is that it’s the same state within 48 hours of each other,” National Weather Service (NWS) meteorologist Benjamin Schott told CNN.

“In modern meteorological history … there’s never been anything like this before where you could have possibly two hurricanes hitting within miles of each other over a 48 hour period,” Schott said.

President Donald Trump signed an emergency declaration on Sunday for Louisiana’s “federal assistance to supplement State, tribal, and local response efforts due to the emergency conditions resulting from Tropical Storms Laura and Marco beginning on August 22, 2020, and continuing,” a statement from the White House read.