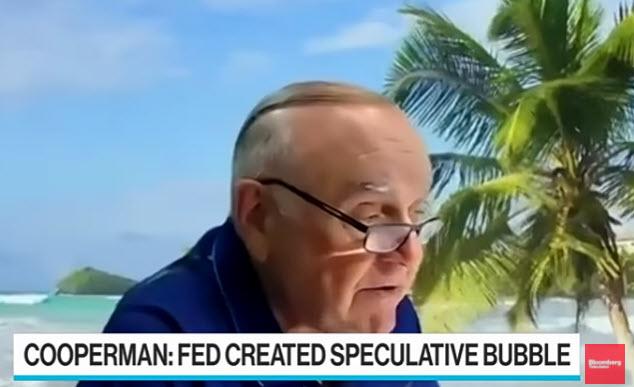 
Billionaire hedge fund investor Leon Cooperman is perhaps best known for appearing on CNBC every time there is a modest selloff to blame the algos that “wreak havoc” to the downside, if ignoring when the same algos relentlessly push stocks ever higher. But today, the Omega Advisors founder made an exception, when instead of attacking programs that merely do what their 20-year-old programmers tell them to do, he put the Federal Reserve squarely in his sights, saying the Fed has created “a speculative bubble” that has pushed debt levels beyond what the U.S. economy can support.

Perhaps having read our weekend post “What’s Going On In The Corporate Bond Market Is Stunning“, Cooperman went on Bloomberg TV (with a rather idyllic tropical island backdrop) and said that the Fed has created a “real speculative bubble” adding that “I am uncomfortable at the present time, not because of the virus, because I’m focused on something the market isn’t focused on. And that is the amount of debt that’s being created. Who pays for the party when the party is over?”

Reminding host Tom Keene that the US just celebrated its 244th birthday, Cooperman said that it took the U.S. “244 years to go from zero national debt to $21 trillion. We will probably end this year with $27 trillion. That’s a growth rate in debt far in excess of what the economy is growing at and I think that’s going to be a problem down the road.”

“I think the Fed has created a real speculative environment. Here are some statistics: Apple announced their 4:1 stock split on July 30. The 20-day average call volume at that time was 721K calls. This past Friday, Apple traded 2.1 million calls, three times the average of 20 days and the stock is up 17% since the announcement of the split.” Then after doing the same exercise with Tesla, which is up 49% since its 5:1 stock split, Cooperman said that ” the last time I checked, if someone gave me five singles for a $5 bill that did not create any wealth.”

Cooperman then shifted his attention to bonds, saying they represent “return-free risk and that’s what has worked in favor of the stock market” adding that what he did not appreciate is what a 0% environment does for stocks: “I think low interest rates are indicative of a problem economy. We have had artificial support for the economy since 2008. I don’t look at that as being a positive, I look at that as a negative.“

And while we appear to have once again reached the phase where billionaires rail against those who make them even richer, we doubt Cooperman’s lament will find much support among his ultra-wealthy peers.