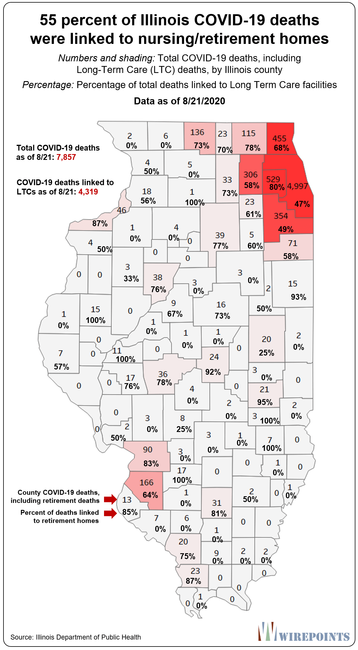 
Authored by Ted Dabrowski and John Klingner via Wirepoints.org,

The failure to protect retirement home residents from COVID-19 is one the biggest failures of Gov. J.B. Pritzker administration’s handling of the pandemic. Questions have been raised repeatedly by Wirepoints and others on whether more could have been done. More than 55 percent of the state’s nearly 7,900 COVID-19 deaths have been tied to nursing homes.

Now, reporting by the Chicago Reader and the Chicago Tribune raise other questions as to how and why the Illinois Department of Health (IDPH) handled retirement homes the way it did. At issue are several executive orders issued by Pritzker early on – and renewed as the pandemic worsened – that suspended several core tasks of IDPH. The result of those orders left hundreds of complaints of neglect and abuse uninvestigated for over three months.

Retirement homes have been at the heart of Illinois’s COVID-19 outbreak from the start. In many counties across the state, the majority of deaths reported have come from Long-Term Care facilities. Total COVID-19 deaths by county, and the percentage of those deaths coming from retirement homes are shown in the graphic.

Last month, the Chicago Reader wrote a detailed article on the administration’s handling of COVID-19. The Reader questioned Pritzker’s use of executive orders to suspend the IDPH’s enforcement of health regulations for the sector. It also criticized Pritzker’s grant of broad immunity to facility operators for potential negligence in the middle of the pandemic.

The article appeared shortly after two IDPH directors responsible for regulating retirement homes were replaced. But the apparent reason why the two directors were let go remained unclear – until now. While there is still no official response from the administration, the Chicago Tribune has uncovered a pretty solid reason for the firing.

The paper wrote last week that IDPH failed residents by neglecting their core task of investigating abuse “for nearly 3½ months during the coronavirus pandemic.”

“A health department spokeswoman said top administrators discovered July 8 that agency personnel had not investigated any of the abuse or neglect complaints it had received from mid-March until June 22 as required by state law. The most serious complaints require an investigation to begin within 24 hours, next-worst within seven days and least serious within 30 days.”

So, not only did the state fail to effectively protect retirement home residents from COVID, but in its rush to manage the situation it failed to protect them from neglect and abuse as well.

It’s no wonder then, that the IDPH has resorted to damage control, announcing that an outside firm will conduct a “a top-to-bottom review” of agency procedures and that a former federal prosecutor will examine several of the departments’ investigations.” Notably both will be focused on “recommending best practices” and “improving existing procedures.” Nothing has been said about holding anyone responsible for what happened.

It’s baffling that Pritzker would use executive orders to relax oversight of nursing homes during the worst part of the pandemic. It runs completely contrary to his other executive orders that led to one of the strictest lockdowns in the country.

Keep an eye on this as the story develops.