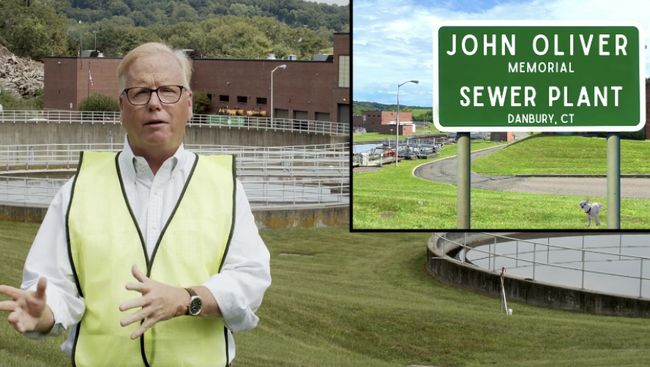 
The Connecticut city formerly best known as “dirty Danbury” – perhaps previously best known for the name of the nearby women’s prison where “Orange is the New Black”‘s author served her sentence – is back in the headlines this week after announcing that it plans to name its new sewage treatment plant after HBO comedian John Oliver.

Why? Because Oliver lambasted the city in a bit from his popular weekly political humor show “Last Week Tonight”. During a segment about discrimination in jury selection affecting most of Connecticut’s small-ish cities (it’s a mostly suburban state), Oliver offered to “fight” anybody from Danbury, because “f**k Danbury,” he said.

During the unveiling, the mayor of the city said the name was appropriate because the plant is “full of crap, just like you, John”.

The comedian focused on the racial disparities in jury selection and reports that minority residents of the Connecticut cities of Hartford and New Britain were excluded from selection.

“If you’re going to forget a town in Connecticut, why not forget Danbury?” he said. “Because, and this is true, f— Danbury. From its charming railway museum to its historic Hearthstone Castle, Danbury, Conn., can eat my whole ass.”

“I know exactly three things about Danbury,” he said. “USA Today ranked it the second-best city to live in in 2015, it was once the center of the American hat industry and if you’re from there, you have a standing invite to come get a thrashing from John Oliver — children included — f— you.”

Danbury Mayor Mark Boughton is a former contender for statewide office and a known political entity in his corner of the state (the border between Conn.’s Fairfield and Litchfield Counties, which abuts New York State). He released a video responding to Oliver that quickly went viral in the local press.

Watch the clip below: