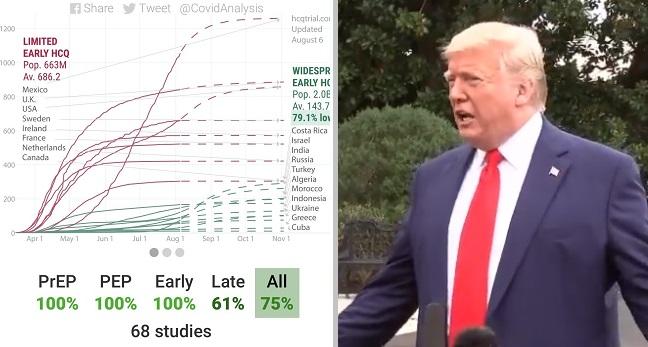 
President Trump took a swipe at the Food and Drug Administration (FDA) in a pair of Saturday tweets, accusing the “deep state, or whoever, over at the FDA” of delaying human vaccine trials by “making it very difficult for drug companies to get people” (test subjects) so that trial results aren’t known until after the 2020 election.

“Must focus on speed, and saving lives!” Trump concluded, tagging FDA Commissioner Stephen Hawn, who he appointed to the role.

The deep state, or whoever, over at the FDA is making it very difficult for drug companies to get people in order to test the vaccines and therapeutics. Obviously, they are hoping to delay the answer until after November 3rd. Must focus on speed, and saving lives! @SteveFDA

Trump also slammed the FDA, rubbing the agency’s nose in their June decision to revoke its emergency authorization of hydroxychloroquine (HCQ) for the treatment of COVID-19.

“Many doctors and studies disagree with this!” tweeted Trump – resurrecting a June 15th ‘Twitter moment’ noting the revocation.

Many doctors and studies disagree with this! https://t.co/fpLVJZMvHS

Hydroxychloroquine – used by many countries as both a front-line early treatment and a prophylactic against COVID-19 – saw sharp pushback from public health officials and Democrats after President Trump recommended it, almost as if the need to prove him wrong and push new treatments was more important than exploring whether HCQ was indeed effective if used early, particularly in conjunction with zinc and the antibiotic azithromycin.

Indeed, the first wave of studies on HCQ focused on mid-to-late stage COVID-19 infections, and found marginal improvement – or in one study, harm, from the use of the popular antimalarial drug. Since then, studies have emerged that HCQ is extremely effective when used early –

In July, the state of Ohio withdrew their ban on the use of HCQ to treat COVID-19.

he anti-HCQ push has infected Silicon Valley as well – as tech giants have been labeling pro-hydroxychloroquine content as ‘misinformation’ – most recently banishing a press conference by a group of doctors touting the drug from just about every platform.

To that end, Yale epidemiologist Dr. Harvey Risch has accused Dr. Anthony Fouci of waging a “misinformation campaign” against the drug – appearing on “Good Morning America” in late July where he further downplayed the drug – claiming that “the overwhelming prevailing clinical trials that have looked at the efficacy of hydroxychloroquine have indicated that it is not effective in [treating] coronavirus disease.”

Several new studies have shown efficacy if used early, while countries that have deployed HCQ in just that manner have significantly fewer deaths per million residents (via c19study.com, which tracks HCQ studies).

HCQ’s efficacy was known by mid-July, when the FDA removed its authorization:

It’s not perfect as HCQ was also used in Belgium and Spain and later in Italy, but the idea is that Western Europe as a whole never embraced the ‘treat early and often’ strategy. Mostly they tried it with sick patients, didn’t work..moved on

They mainly followed the WHO position

Meanwhile, over 700 physicians from all 50 states have called on President Trump to issue another Emergency Use Authorization on HCQ.

The physician signatories specialize in the following kinds of medicine:

Dr. Fauci’s NIH is suppressing #Hydroxycholoroquine. @RealDonaldTrump should ask Dr. Fauci about NIH’s refusal to conduct or support real research on HCQ despite the likely efficacy of this safe drug as a #coronavirus treatment and preventative.