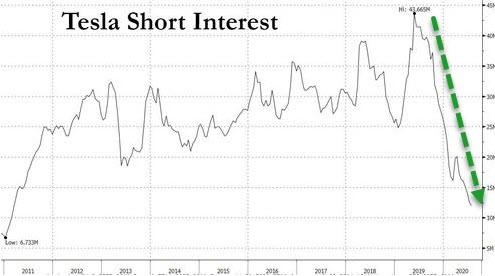 
Short sellers betting against Tesla have lost a collective $25 billion so far this year, according to data from S3 partners and Business Insider.

Those short Tesla are down $25.4 billion mark to market on Tesla in 2020 so far as Tesla stock has rallied nearly 400% on the year. The company now has a fully diluted market cap approaching $400 billion.

Short sellers are down about $7 billion in August alone and added over $1 billion to their loss tally last Thursday as the stock eclipsed the $2,000 mark for the first time. On Friday, they lost another $619 million as mindless retail buyers drove the stock higher ahead of its upcoming 5 for 1 split.

Ihor Dusaniwsky, managing director of predictive analytics at S3, said: “Tesla continued steady short covering for over a year as shorts continue to get squeezed.”

So are short sellers just gluttons for pain at this point? Or are they simply convinced they are riding out what could be the largest stock bubble in the history of human kind?

Even acknowledging the castrated response that regulators have taken toward Tesla thus far, the overwhelming amount of evidence stacked against the company – from faking an $80 billion buyout, to pumping non-existent solar roof tiles, to the Solar City bailout, to lax warranty accounting, to retaliating against whistleblowers, to claiming millions of Robotaxis are coming, to the lack of a General Counsel, to the CEO indemnifying his own board, to charging thousands for a full self driving product that doesn’t exist, to beta testing autonomous driving on unaware participants and to selling ZEV credits to turn a profit – still has us wondering if shorts will eventually have their day.

Or, is Elon truly bulletproof?