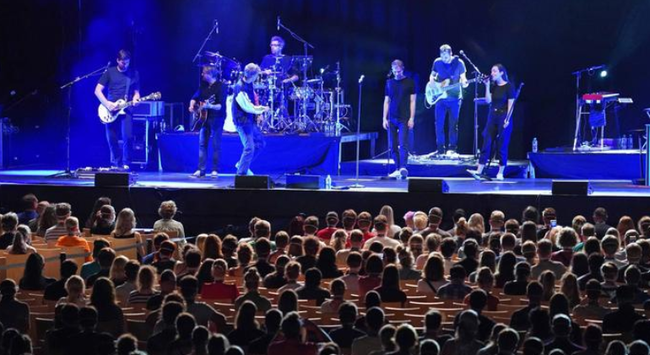 
German researchers have packed some 2,000 people into an indoor “experimental concert” in order to learn more about how COVID-19 spreads at large, chaotic venues where normally health officials would be at a loss if they wanted to initiate contact tracing.

Held in the German city of Leipzig, participants enjoyed a live concert featuring German pop star Tim Bendzko, however, it was also a tightly control scientific experiment with each fan issued glowing hand sanitizer and electronic trackers. Attendees tended to be young and healthy, and had to show a negative COVID-19 test to be part of the experiment.

All were also wearing respiratory face masks and outfitted with “contract trackers” in order to record their contact rates and distances from other participants.

It’s part of a number of experiments designed with the ultimate end-goal of avoiding another total societal and economic lockdown like occurred last Spring.

Scientists hope to better gauge risk when it comes to large public events, also in order to present health officials and politicians with more options in terms of keeping venues open, but with restrictive health measures to prevent super-spreader events.

Using data from the contact trackers, scientists from The University of Halle will monitor the number “critical contacts” had by each participant during specific times and locations, while the residue left by fluorescent hand gel will identify frequently touched surfaces. Researchers hope to use the data to find ways to bring big events, including sports, back safely.

Dean of the University of Halle’s medical faculty Michael Gekle emphasized, “We cannot afford another lockdown,” according to CNN. “We have to gather the data now in order to be able to make valid predictions,” he added.

“There is no zero risk if you want to have life. We want to give the politicians a tool in order to decide rationally whether to allow such an event or not,” he described of the valuable data that hopes to be gained. “That means they have to have the tool to predict how many additional infected people such an event will produce,” he concluded.

The Leipzig concert was actually one of three scenarios as CNN describes:

Researchers directed volunteers to run three scenarios — one that simulated a concert pre-coronavirus, a second simulating a concert during the pandemic, with improved hygiene measures in place, and a third, with reduced participants. Scientists will gather the data, apply a mathematical model, and evaluate the hygiene interventions, with conclusions ready by the end of the year.

Such large-scale experiments could also given clearer direction to professional sports globally and in the US, where multi-billion dollar leagues have been put on hold for months, or are under threat of being canceled altogether.

Meanwhile, the NBA is now conducting its own ‘live experiment’ of sorts by holding the rest of its season in an isolated ‘bubble’.

Players, staff, and officials are playing under complete quarantine, with no fans or outside visitors, at Disney World and will live at a group of hotels for months as the playoffs conclude.