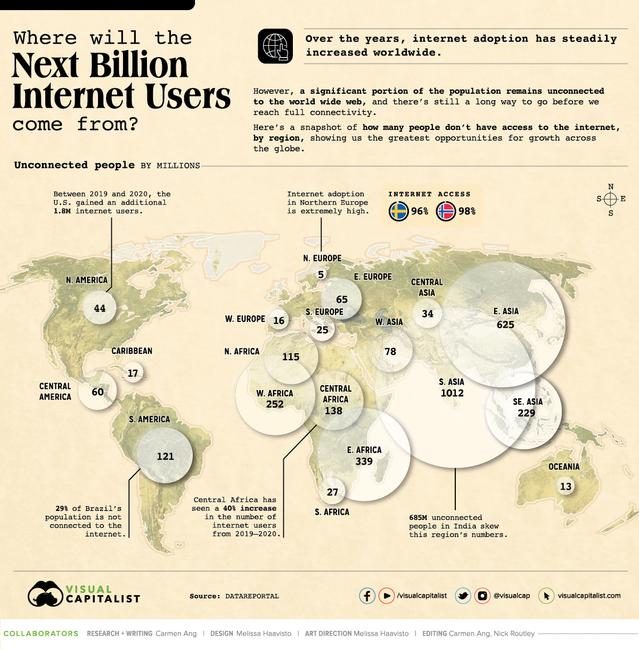 
Internet adoption has steadily increased over the years – it’s more than doubled since 2010.

But, as Visual Capitalist’s Carmen Ang details below, despite its widespread use, a significant portion of the global population still isn’t connected to the internet, and in certain areas of the world, the number of disconnected people skews towards higher percentages.

Using information from DataReportal, this visual highlights which regions have the greatest number of people disconnected from the web. We’ll also dive into why some regions have low numbers, and take a look at which countries have seen the most growth in the last year.

Top 10 Most Disconnected, by Number of People

The majority of countries with lower rates of internet access are in Asia and Africa. Here’s a look at the top 10 countries with the highest numbers of people not connected to the web:

Interestingly, India has the highest number of disconnected people despite having the second largest online market in the world. That being said, 50% of the country’s population still doesn’t have internet access—for reference, only 14% of the U.S. population remains disconnected to the web. Clearly, India has some untapped potential.

The gap in internet access between rural and urban China is significant. This was made apparent during China’s recent switch to online learning in response to the pandemic. While one-third of elementary school children living in rural areas weren’t able to access their online classes, only 5.7% of city dwellers weren’t able to log on.

It’s important to note that the rural-urban divide is an issue in many countries, not just China. Even places like the U.S. struggle to provide internet access to remote or rugged rural areas.

While India, China, and Pakistan have the highest number of people without internet access, there are countries arguably more disconnected.

Here’s a look at the top 10 most disconnected countries, by share of population:

There are various reasons why these regions have a high percentage of people not online—some are political, which is the case of North Korea, where only a select few people can access the wider web. Regular citizens are restricted from using the global internet but have access to a domestic intranet called Kwangmyong.

Other reasons are financial, which is the case in South Sudan. The country has struggled with civil conflict and economic hardship for years, which has caused widespread poverty throughout the nation. It’s also stifled infrastructural development—only 2% of the country has access to electricity as of 2020, which explains why so few people have access to the web.

In the case of Papua New Guinea, a massive rural population is likely the reason behind its low percentage of internet users—80% of the population lives in rural areas, with little to no connections to modern life.

While internet advancements like 5G are happening in certain regions, and showing no signs of slowing down, there’s still a long way to go before we reach global connectivity.

Despite the long road ahead, the gap is closing, and previously untapped markets are seeing significant growth. Here’s a look at the top five fast-growing regions:

Africa has seen significant growth, mainly because of a massive spike of internet users in the Democratic Republic of Congo (DRC)—between 2019 and 2020, the country’s number of internet users increased by 9 million (+122%). This growth has been facilitated by non-profit organizations and companies like Facebook, which have invested heavily in the development of Africa’s internet connectivity.

If these countries continue to grow at similar rates, who knows what the breakdown of internet users will look like in the next few years?