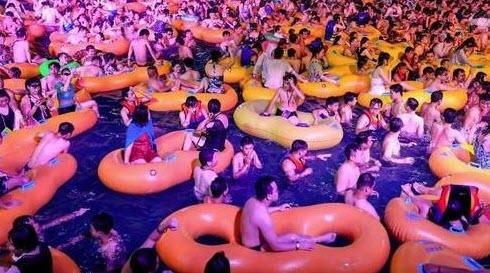 
Videos and photographs of a massive electronic music concert that took place at a Wuhan water park days ago have sparked outrage from the international community regarding the concert’s lack of social distancing or mask-wearing.

But China says the beef is unjustified. Rather, they said that “critics are just bitter about their own nations’ poor handling of the Covid-19 pandemic,” according to a new report from RT.

The photos of the concert quickly went viral after they were released and while some said they offered hope to a post-Covid world, others were critical of China. For example, the Daily Telegraph in Australia released a front page photo of the party stating: “Life’s a beach in Wuhan as world pays virus price.”

Scenes of residents in Wuhan, the city that was put under lockdown for 76 days due to the coronavirus epidemic, dancing to the music while cooling off in a water park amid the summer heat have gone viral on social media including Twitter, but the reaction from foreign netizens exposed overseas “sour grapes” and also prompted some to reflect on epidemic control in their own countries.

Recall, about 24 hours ago, we reported that thousands of concert-goers piled into the Wuhan Maya Beach Water Park last weekend to attend the massive concert.

We noted: “The scene would be considered “unthinkable” in many other parts of the world, yet in Wuhan – who had arguably the strictest lockdowns of any geographic location – life is starting to look like it did pre-pandemic.”

The city had not reported any new cases since mid-May, after lifting a 76 day draconian lockdown in early April.

The Wuhan Maya Beach Water Park reopened late in June and crowds finally began to come out in August.

Despite the turnout for this concert, the water park says it is only doing half the business it did the year prior. The park currently gets about 15,000 daily visitors during weekends and is trying to entice new business by offering half price discounts.

Wuhan was the original epicenter of the coronavirus and accounts for 60% of all cases in the country, according to China.

Whether or not China has been honest with its infection numbers remains to be seen; but maybe the world should take a cue from ground zero relaxing its lockdown measures in what is also likely a nod to the growing body of evidence that the virus may not be as devastating as the world once thought.