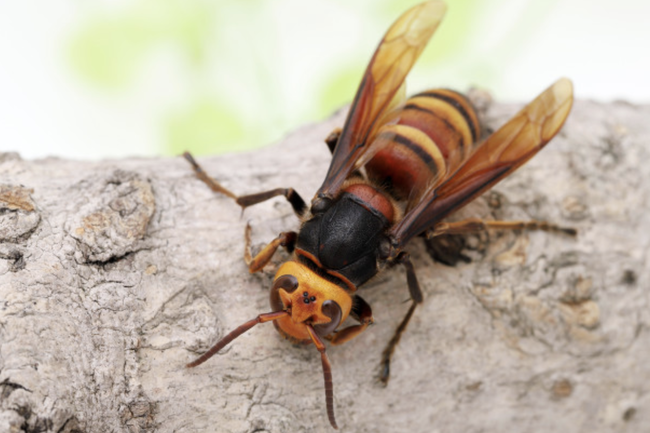 
Though it’s still a little early in their hunting season, it appears a hive of “Murder Hornets” (the popular name for the Asian Giant Hornet, native to parts of Japan) has indeed taken root in Washington State. The live hornet was trapped near Custer, Washington on July 29 (then processed in the state Department of Agriculture’s entomology lab on Aug. 13). Now scientists are saying it’s official. One plausible theory is that the hornet was part of a team of ‘scouts’ sent out shortly before the hornet’s hunting season begins to try and get a read on where the food might be.

We first introduced the concept of “Murder Bees” back in early May, when the New York Times published a story about their presence in Washington State. It’s believed they arrived late last year in cargo from Asia.

Hunting season begins in late summer/early fall (typically in September), but it appears these hornets are getting to work early, perhaps because their numbers are still small, as the new colony takes root on American soil.

“Trapping a male Asian giant hornet in July initially came as a surprise,” Sven Spichiger, the agency’s managing entomologist, said in a press release this week. “But further examination of the research and consultation with international experts confirmed that a few males can indeed emerge early in the season.”

Suspicions about a potential Murder Hornet infestation first arose in May when a beekeeper reported the devastation of his hive by an unknown assailant to local wildlife authorities. Experts surmised Murder Hornets were probably to blame. A specimen was located in July – an unmated queen – and now this, the first living male specimen, only five months later.

To be sure, the Agriculture Department said that their initial catch back in July appeared to be an unmated queen, a promising sign that their makeshift traps might have succeeded in crippling the new colony.

But apparently, the hornets are still coming out to hunt.

We’ll see what things look like in a month.