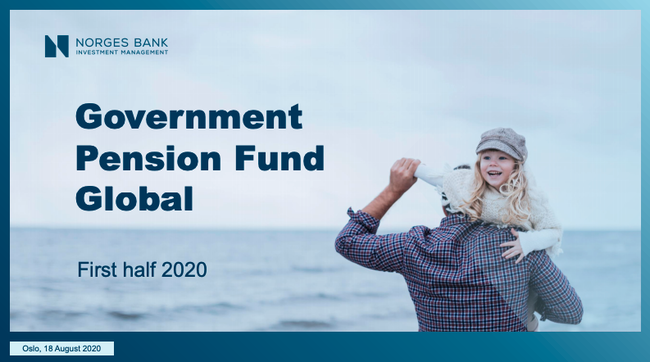 Citing “major fluctuations” in equity markets, Deputy CEO of Norges Bank Investment Management Trond Grande said the year started great but quickly turned for the worse when the spread of the virus led to market meltdowns.

“There were major fluctuations in the equity market in this period. The year started with optimism, but the outlook of the equity market quickly turned when the Corona virus started to spread globally,” said Grande.

Grande said, “however, the sharp stock market decline of the first quarter was limited by a massive monetary and financial policy response.”

During the half, the fund was 69.6% invested in equities, 27.6% in fixed income, and 2.8% in real estate. Equity investing was by far the worst investment during the period, down 6.8%.

A Reuters graphic shows Norway’s sovereign wealth fund is the largest in the world.

The fund’s portfolio of energy companies were the weakest performers, with those stocks down by at least a third due to plunging oil prices. Technology stocks fared the best, soared 14.2% over the period. The fund’s largest holdings were Microsoft, Apple, Amazon, and Alphabet.

The Norwegian government has been tapping into the fund, withdrawing billions of dollars since March to pay for the pandemic-related costs.

“Even though markets recovered well in the second quarter, we are still witnessing considerable uncertainty,” Grande said.

With the tech stock rally repeating that of the 1990s Dot-Com bubble. What could possibly go wrong for the world’s largest sovereign wealth fund with some of its largest holdings in these highly overvalued stocks?