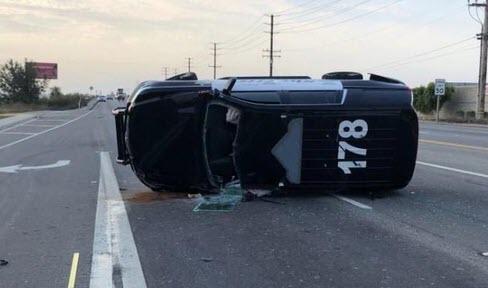 
A suspect was arrested and charged with attempted murder yesterday after repeatedly ramming, and eventually overturning, a Venutra County Sheriff’s Department SUV, according to CBS Los Angeles.

The Sheriff’s office says that a patrol sergeant was on duty at about 2AM on Los Angeles Avenue when, in what it is calling an “unprovoked attacked” he was rammed twice from behind, forcing the SUV to overturn.

Capt. Eric Buschow with the Ventura County Sheriff’s Department told KEYT: “As the sergeant accelerated his patrol vehicle the suspect accelerated as well and then rammed into the back of the sergeant’s vehicle a second time. That action spun the patrol car around and caused it to flip onto its side.”

“Other deputies in the Fillmore area were able to spot the suspect vehicle in the Santa Paula area, and they tried to stop the vehicle and he didn’t stop and led them on a high-speed pursuit,” said Buschow.

UNPROVOKED ATTACK: A suspect twice used his vehicle to ram into our HQ patrol Sgt’s cruiser early this morning in Saticoy, causing the Sgt’s unit to overturn. Sgt. has minor injuries, and suspect in custody. pic.twitter.com/QU9clLQpc0

The deputy had minor injuries and the suspect was identified as 29 year old Frankie Avalos. He was charged with suspicion of attempted murder of a police officer.

“He was pulled out of the vehicle by rescue personnel from the fire department and taken to a local hospital. He suffered just minor injuries,” Buschow said of the officer.

We will update this story if more details regarding motive become available.

Simon Property: Is 6% Dividend Yield Worth the Risk? | Investing.com