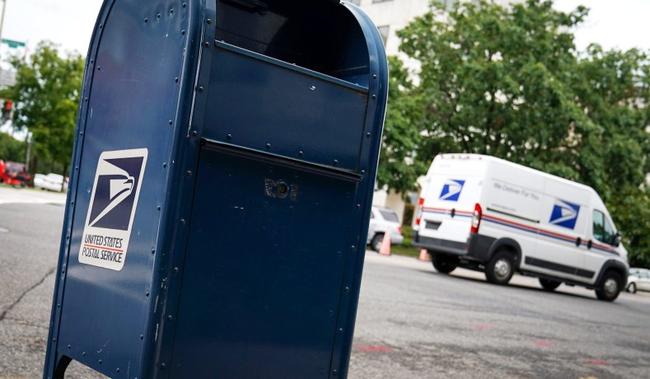 
Authored by Tobias Hoonhout via NationalReview.com,

Twitter has declined to address viral tweets pushing misinformation about the Postal Service, saying they did not violate the company’s updated civic integrity policy, which was used to fact-check President Trump in May…

After Trump said last week that he opposed funding the USPS because “that means you can’t have universal mail-in voting,” tweets of mailboxes being “locked” or stored away went viral on Twitter.

In your entire life have you ever seen a LOCKED mailbox at the USPS?

Where are you @senatemajldr ? pic.twitter.com/YcbVUTnv37

Photo taken in Wisconsin. This is happening right before our eyes. They are sabotaging USPS to sabotage vote by mail. This is massive voter suppression and part of their plan to steal the election. pic.twitter.com/QXLWGIHTrz

The claims, which have over 25,000 and 82,000 retweets respectively, elicited dramatic claims about Trump’s alleged efforts to disrupt the upcoming election. Walter Shaub — head of the U.S. Office of Government Ethics under President Obama — said “this is what a coup looks like,” while top Democratic impeachment aide Daniel Goldman called it “the most anti-democratic thing [Trump] has done.”

But other Twitter users debunked both posts in comprehensive threads.

“This is my post office. These mailboxes are open on the other side, you just have to get out of your car to mail them. It’s been this way for months. This isn’t part of the purge,” one user replied to former NBA player Rex Chapman’s tweet.

She then went to the physical location to show the mailboxes were still in use.

Here is where people can mail their letters at the Burbank P.O.. They lock the other side and the lobby is locked when the Post Office is closed. It’s very dangerous to post misinformation. It panics people, especially during this scary era. pic.twitter.com/aYPlJqzEP0

A news article from 2016 shows that the local post office had retrofitted the boxes to keep people from breaking into them.

“We do this where we have had incidents, or there is a problem where the box may be out in a not very well lit public place. The boxes have been retrofitted all over Southern California,” a USPS spokesman said at the time.

Photojournalist Gary He also explained in a comprehensive thread why the Hartford, Wisc. post was inaccurate.

“They have been there for years,” he explained, saying he spoke to the company which owned the lot and has a government contract to refurbish mailboxes.

He also criticized Reuters, which took photos of the mailboxes, for labeling their caption “as just an ‘industrial lot’” without providing additional context about the company’s longstanding work salvaging old mailboxes.

To find this location on Google, you have to search for “Hartford Finishing”. It’s a side road, not like you can spot the mailboxes from a highway. The sign for the business is 20 feet away from the mailboxes. To omit all this from the caption is journalistic malpractice. (4/8) pic.twitter.com/DIvUTj9urb

Following He’s thread, a Reuters spokesperson told National Review that, upon review of the photos, they had determined the original captions only “provided brief details” and had updated them with additional information.

The captions on Reuters’s website now explain that the mailboxes are “in a storage lot of a sandblasting and painting company,” adding that “people who live nearby said the pile had grown noticeably larger in recent weeks.”

But a USA Today fact-check confirmed that Hartford Finishing has a contract to collect mailboxes and determined the viral tweet’s claims were “false.” The fact-check also found that a picture of the lot from Google’s “Street View” taken in August 2019 “shows stacks far larger than the one in the viral image,” disproving Reuters’ claim that the stacks had recently grown dramatically.

Hartford Finishing did not return a request for comment on whether they had received a large uptick in collection boxes in recent weeks. Last week, the USPS said it would stop removing mailboxes in its Western region, including Wisconsin, until after the election following a public outcry that held the reforms out as part of an effort to disrupt the November election.

Despite the corrections, a Twitter spokesperson told National Review that the viral tweets did not violate the platform’s rules, including its civic integrity policy – which prohibits “misleading information relating to votes not being counted.”

Twitter cited the policy when it added a “fact-check” to Trump’s tweets about mail-in ballots, after he claimed that California was sending ballots to “anyone living in the state, no matter who they are or how they got there.”

“Per our Civic Integrity policy, the tweets yesterday may mislead people into thinking they don’t need to register to get a ballot (only registered voters receive ballots),” Twitter CEO Jack Dorsey explained at the time.

“Republicans feel that Social Media Platforms totally silence conservatives voices,” Trump responded, later signing an executive order on social media bias. “We will strongly regulate, or close them down, before we can ever allow this to happen.”

[ZH: We give the last word to Mollie Hemmingway:]