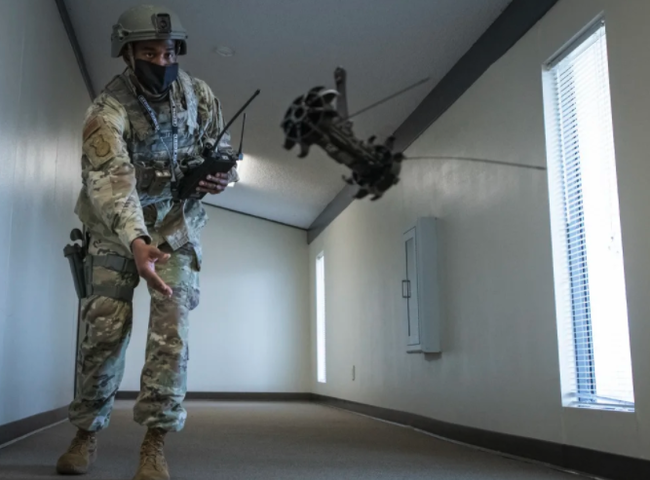 
The Air Force has added throwable reconnaissance microrobots to their arsenal for base security missions, read a military press release.

Airman of the 96th Security Forces Squadron (96th SFS), at Eglin Air Force Base, located in western Florida, were supplied with Throwbots, a football-sized robot that remotely transmits video and audio to the operator, to help them clear buildings, locate and identify suspects, and confirm the layout of a room during hostage situations. The robot will also be used for vehicle inspections at base checkpoints and random anti-terrorism missions.

“It took five minutes for me to learn how to use it,” said Leon Gray, from the 96th SFS, after examining the device at a defense trade show.

Gray said, “it quickly became apparent how our security personnel could utilize this tool in our operations.”

“If this gadget sounds familiar, it should. In the first-person shooter Rainbow Six Siege, players use wheeled drones to scout outbuildings, scan for enemy players, and even serve as stationary cameras,” Task & Purpose said.

The Throwbot is rugged, can survive a 30 feet fall and travel on uneven terrain. Airman can even tow up to 4 pounds of gear with the robot. A camera on the front allows the operator to remotely control the device with a handheld joystick.

Add Throwbot to the long list of robots the military is quickly adopting in the last couple of years as trillions of dollars have been spent to modernize forces.