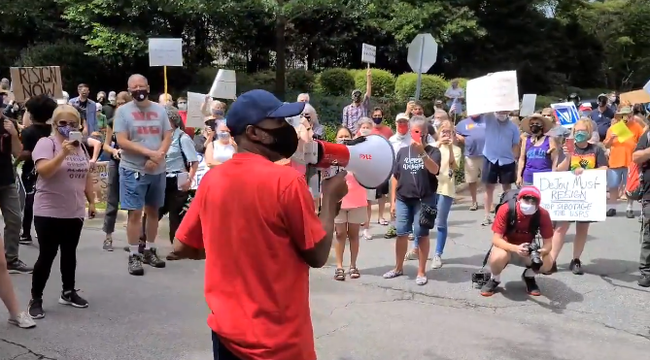 
Protesters swarmed the DC and North Carolina homes of Postmaster General Louis DeJoy, after Democrats accused President Trump and DeJoy – a Trump appointee – of interfering with the 2020 election.

On Saturday, activist group “ShutDownDC” swarmed DeJoy’s home in the nation’s capitol, blowing air horns as they demanded action in a “wake-up call” and a “noise demonstration” against DeJoy ‘dismantling’ the USPS to rig the system in Trump’s favor.

“DeJoy has fired or reassigned much of the existing USPS leadership and ordered the removal of mail sorting machines that are fundamental to the functioning of the postal service. Meanwhile, mail delivery is slowing down under other decisions made by DeJoy, such as eliminating overtime for postal workers,” the group told USA9.

Protesters are making their way to the Postmaster General’s house for what they call a “wake-up call” pic.twitter.com/swK0CEboPv

This morning we stopped by @USPS Post Master General Louis DeJoy’s house to give him a wake up call. We need the postal service to #DeliverDemocracy this fall. Stop the attack on our mail! #USPSisEssential #USPS2020VOTE https://t.co/a8KmFt5hIU

And on Sunday, protesters surrounded DeJoy’s Greensboro, North Carolina home in a similar show of opposition.

“This is what democracy looks like,” chanted protesters as they marched through the neighborhood – disrupting the Wyndham Championship golf tournament, according to Breitbart, which notes that “The protest came after Sen. Elizabeth Warren (D-MA) and Rep. Carolyn Maloney (D-NY), among others, last week asked the USPS inspector general to investigate ‘all recent staffing and policy changes put in place’ by Mr. DeJoy,” the New York Times reported.”

“We need to make some good trouble.The president has said he wants to cripple the post office,” one protester told the Greensboro News & Record.

To read more about the USPS controversy, click here.