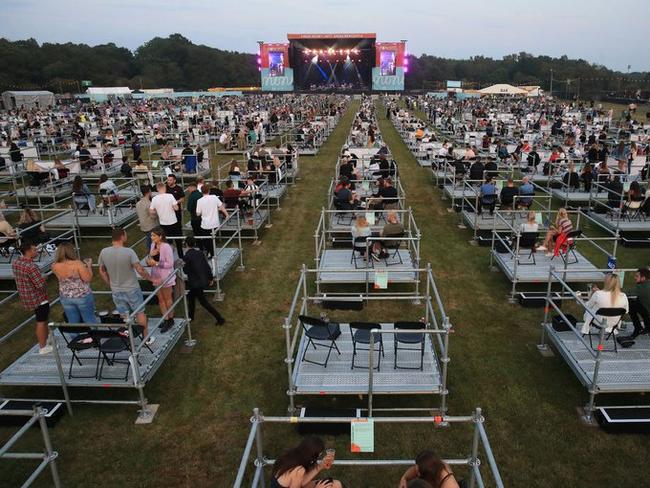 
Concert-goers at Gosforth Park, in the city of Newcastle, England, attended the country’s first large-scale socially distanced outdoor show of the year.

When fans arrived, the park was lined with 500 mini enclosures, kept apart at about 6.5 feet. Each pen was enough for five people to sit but barely any room for standing or a beer cooler.

Organized by Virgin Money and SSD Concerts, the entire layout of the concert space had to be reworked to meet strict social distancing regulations. For instance, fans preordered food and drink from concession stands to avoid lines.

“We’ve also got lots more toilets than we would usually have for normal festivals to keep people apart.

“Hopefully groups together on their platforms in their own bubbles will have a good time and still get the vibe of a really good concert experience.”

BBC notes 2,500 tickets to the event were sold out in ten minutes as concert-goers have seen many of their favorite shows canceled this year.

Open-air, socially-distanced Sam Fender gig in Newcastle. I actually don’t think this looks *that* bad as it goes pic.twitter.com/BXvcRJdGS6

However, a small concert was held last month with 200 Frank Turner fans at Clapham Grand in London.

Still, life, as we know it, is far from returning back to normal. As for moshing pits, well, that could be a thing of the past in a post-pandemic world.