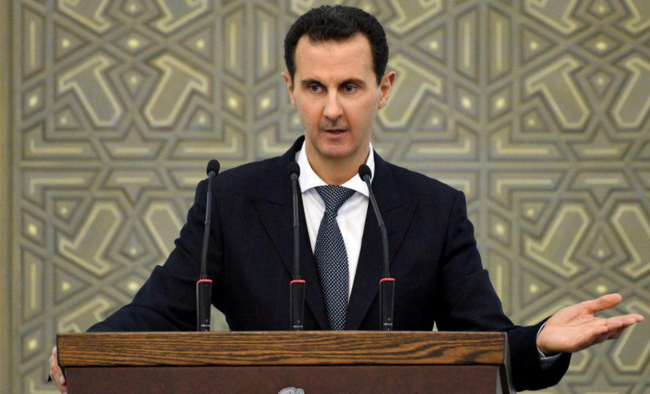 
On Wednesday Syria’s President Bashar al-Assad was delivering a televised speech before a newly inaugurated parliament when he appeared to nearly pass out.

Shortly before the unusual incident which caused him to unsteadily and slowly walk away from the podium mid-speech, he was seen wiping his brow and briefly appeared in physical distress.

State-run SANA, citing the office of the Syrian presidency, said it was due to a sudden drop in blood pressure.

NEW – Here’s footage of Bashar al-#Assad mopping his forehead, slowing his speech & stepping away from the podium mid-speech in #Damascus. pic.twitter.com/p96Tq81d7p

He caught government ministers off-guard when be lurched back wearily, saying, “I need to sit down for just one minute… just a minute.”

An official statement described: “The speech paused for a few minutes due to a slight pressure drop that afflicted the president before returning to resume the speech normally.” The pause reportedly lasted a few minutes.

Indeed the 54-year-old ruler of Syria was later seen returning to the podium and the address resumed. But it comes amid what’s widely suspected to be an explosion of coronavirus cases inside Syria, especially the densely-packed capital of Damascus, given an influx of millions of internally displaced refugees after nine years of war.

International monitors have complained that it’s been hard if not impossible to gauge true case numbers in the war-torn country, with weeks ago NPR alleging coronavirus has “overwhelmed” government areas while the Assad government conceals the true extent of the outbreak.

Officially reported numbers stand only at 1,255 cases, including 52 deaths – but some Syria watchers have posited that as many as 100,000 in Damascus alone may be infected.

Assad later returned to the podium amid supporting chants from parliamentarians:

#Syria‘s 🇸🇾 dictator Bashar #Assad interrupted a speech he was giving to parliament after suffering a brief “mild” drop in blood pressure, said he didn’t eat since yesterday afternoon

He the continued speech as normal w the MPs chanting “we defend you w our bloods, w our souls” pic.twitter.com/6zt7jylOc9

This produced widespread speculation following Assad’s near fainting incident that he could have coronavirus, however, other well-known Syria analysts have pointed out the gaunt leader is known not to eat very much and has been under immense stress, given the smashed post-war economy and sweeping US-led sanctions.

Before the speech ran on TV, regional media throughout the day said it might be postponed due to president having fallen “ill”.