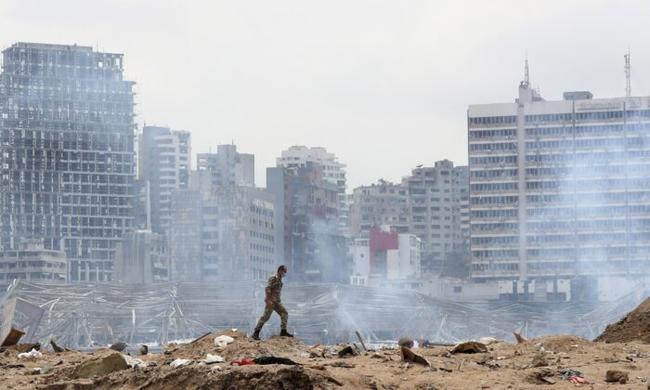 
US Defense Secretary Mark Esper appeared on FOX Saturday evening to explain the discrepancy between official Lebanese government statements that the Aug. 4 Beirut port explosion was an accident based on severe “negligence” and President Trump’s initial statements in the aftermath that it was a “terrible attack”.

Trump had raised eyebrows in saying at a White House press conference in the hours after the tragedy that left over 150 dead, while referencing his generals: “They seem to think it was an attack. It was a bomb of some kind.”

In the days after both Trump and the Pentagon tried to walk back the statements, now with Esper in the weekend FOX interview saying that ultimately it was not clear whether the explosion was the result of “a deliberate attack or an accident”.

Last night on Judge Jeanine, Defense Secretary Esper called it “regrettable” that “some in the media” were trying to divide him and the president over the Beirut explosion by just pointing out that he said it was probably an accident while Trump said it looked like an attack. pic.twitter.com/F5IuZE21pw

“The bottom line is that we still don’t know. You know, on the first day, as President Trump said, we thought it might have been an attack. Some of us expected it might be, for example, a shipment of weapons to Hezbollah that exploded. Maybe a manufacturing facility,” Esper said.

“Some of us speculated it could have been for an example a Hezbollah arms shipment that blew up, maybe a Hezbollah bomb-making facility,” Esper told show host Jeanine Pirro.

“I have said before that it looks like an accident,” Esper continued. “It is unfortunate that some in the media have tried to create divisions within the administration, perhaps between me and the president and others.”

He concluded, “It is simply not true. I mean, the truth of the matter, it is a great tragedy. Under the leadership of the President, we will do our best to help the Lebanese people and do what is right.”

It’s been since revealed that not only was an estimated 2,750 tons of ammonium nitrate left unsecured for over 6 years in a warehouse at the port, but a large quantity of fireworks had been impounded in the same warehouse complex, near the highly explosive substance commonly used in fertilizer and manufactured explosives.

Meanwhile, despite now raging protests in reaction to government negligence which allowed 2,750 metric tons of ammonium nitrate to be “stored unsafely”, Lebanese President Michel Aoun has rejected calls for an international investigation as a “waste of time”.

“The goal of calls for an international investigation in the port case is to waste time,” the President’s media office cited him as saying.

Powerful video of the #BeirutBlast from just 500 meters away. The individual who took the footage survived, fortunately.pic.twitter.com/FDkKQZkPt6

It is as yet unclear whether Washington will add pressure on the Lebanese government to allow an international team to head up an official investigation.

Given current media claims that Hezbollah also conducted operations at the port, it is likely the administration will push for an outside, independent investigation into the cause of what’s been acknowledged as the largest non-military munitions explosion in history.