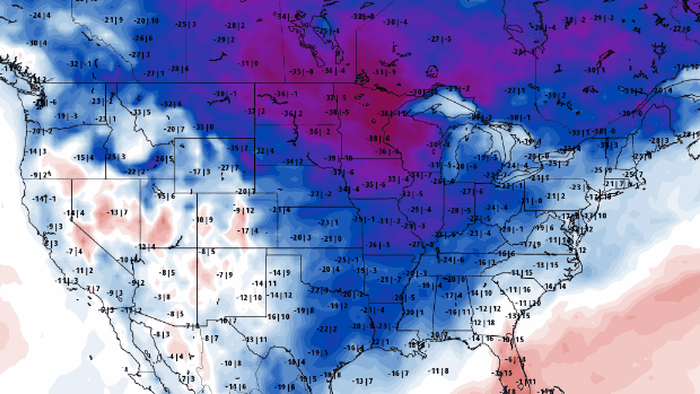 
Progressive Farmer Meteorologist John Baranick penned a note this week, making a case for the return of winter for a large swath of the Lower 48 — something we’ve pointed out in recent weeks — recall, Siberia Records Minus-80 Degrees As Talk Of Polar Vortex Grows.

The year started with above-average temperatures for much of the Lower 48. Now Baranick forecasts a major shift in the weather for the Canadian Prairies, Northern and Central Plains, and Upper Midwest.

“These areas will have the longest duration of low temperatures from the upcoming event that is forecast to last about two weeks, or into mid-February,” he said.

Other parts of the country will see varying temperatures with the West, Southern Plains, rest of the Midwest, and Northeast more likely to see cold than warm, and the Southeast to see more warm than cold during the same time frame.

Temperatures in the northwestern Corn Belt and Canadian Prairies will be 10 to 20 degrees Fahrenheit below normal on average during that two-week period while some bursts of arctic air will make those even colder. Warmth in the Southeast will resist the deeper penetration of the arctic air.

The setup of very low temperatures in the northwest and warm conditions in the Southeast will fuel an active storm period. The initial front itself will be setup by a clipper system moving through southern Canada Jan. 26-28.

That front will be continually pushed southward by a couple of storm systems forming along that front, with the colder air reaching down to Texas and the Ohio River by Jan. 29. Another push should bring that cold air deeper early to middle of next week, but the far Southeast, near the Gulf and Atlantic Coasts, are likely to be spared the colder temperatures until late next week.

The latest run of the Global Ensemble Forecast System model shows arctic air should begin pouring into the Midwest this weekend.

“The incoming cold will send energy demand up, and how often that reaches the more populated areas of the country in the east and south will determine how much demand increases. Natural gas prices have taken a dive recently due to a very warm January. But they are likely to go up,” Baranick explained.

However, NatGas futures dropped to a 19-month low on Wednesday despite long-term weather models forecasting colder weather for the Lower 48.

When does the cold recede? Models disagree on timing, but a building ridge of high pressure in the Southeast may be able to push back the cold more to the western portions of the U.S. and Canada to bring some relief around mid-February.

And he added: “So, buckle up, the reign of winter is back upon us and will have some staying power.”