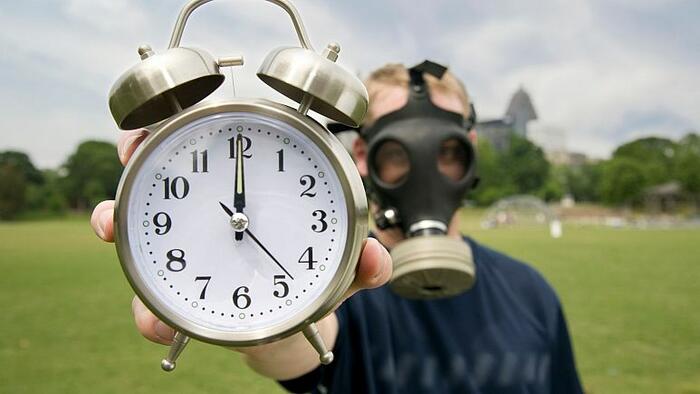 
The Kremlin has weighed in on The Bulletin of the Atomic Scientists moving the Doomsday Clock closer to midnight. As we reported earlier, the body of scientists and intellectuals which have maintained the clock since 1947 on Tuesday moved it to 90 seconds till midnight, which is the closest it’s been in history. It seeks to gauge how close the world stands to nuclear war and total annihilation.

The Bulletin explained that the clock moving closer is mostly due to escalation among world powers in Ukraine. The Russian government on Wednesday called it “really alarming” – with Kremlin spokesman Dmitry Peskov confirming that de-escalation does not at all seem to be on the horizon, and that the question of ceasefire talks is a thing of the past.

“On the whole, the situation is really alarming,” Peskov said, explaining that at this point nations must be “particularly attentive, vigilant and responsive” – and willing to take appropriate measures to reduce risk of nuclear war.

The Tuesday change put the clock closer by 10 seconds compared to the year before.  As The Hill reviews: “The previous record of 100 seconds to midnight was set in 2020. In the clock’s history, midnight has been as far as 17 minutes away, which happened in 1991 at the end of the Cold War.”

“Midnight has typically been close to 10 or more minutes away throughout much of the clock’s history, even during the Cold War, but it has been no more than a few minutes away in modern times.”

The bipartisan DC consensus in favor of Biden’s war escalation in Ukraine blissfully marches on, as usual, despite graver warnings of escalation. The more escalation there is, the less debate.

The key question remains: how are the lives of Americans improved from this war?👇 https://t.co/Ll27tIsogh

With the US and Germany on Wednesday confirming that they are sending heavy battle tanks in a fresh major escalation which a mere months ago had not been a realistic consideration, journalist Glenn Greenwald has pointed out that we are in a situation of “more escalation” and “less debate”.

He poses the question of the US public broadly – “The key question remains: how are the lives of Americans improved from this war?”