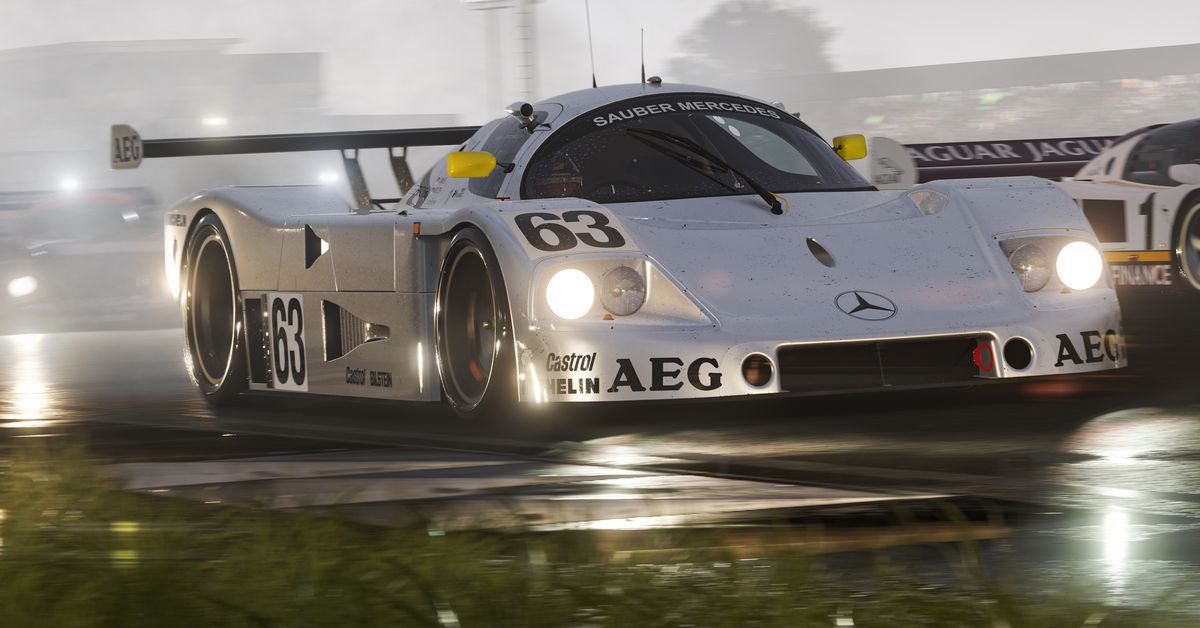 
Yes, Forza Motorsport is a flex. It’s a showcase for everything the Xbox Series X can do above its predecessors, and even contemporary PC hardware. But all that muscle and flexing doesn’t mean much if the game isn’t fun.

“Motorsport is about competition, and threat, and really going to war with your machine,” Dan Greenawalt, Microsoft’s director in charge of the Forza franchise, told Polygon last week. That’s the dividing line between the reborn Forza Motorsport, whose last edition launched in 2017, and its Forza Horizon cousins, which have published two editions since.

The game, revealed Wednesday during Xbox’s Developer Direct showcase, brings a fleet of more than 500 cars, with all the audiovisual fidelity that fans have expected of an Xbox showpiece for more than 20 years. But more than those numbers — like the promise of 4K resolution at 60 frames per second, with ray-traced light rendering — Forza Motorsport’s creative director wants fans to know they will get a truer-playing racing video game than they have before.

“It’s really important for this game to have these bleeding edge physics, because, that’s gameplay to me,” Chris Esaki, creative director at Turn 10 Studios, told Polygon. “It’s where the rubber meets the road; it’s the actual moment-to-moment experience. When it’s deeper, when it’s high-fidelity, there’s just so much there to really tease out, and it becomes a game that’s really about skill and mastery.”

The physics invoked by Esaki encompass details like the individual parts players may acquire and apply to their cars; an after-market spoiler is going to affect the ride more than just cosmetically, Esaki promised. Players should feel the additional downforce on their rear ends, to put it politely. The tire modeling has also been reworked. Instead of a single reference point underneath each wheel, Esaki’s team has expanded the tire patch to a rectangle comprising eight points of contact, reporting in to the CPU at six times the rate of the last Forza game.

“What that means is tons of grip,” Esaki said. “The tires are searching out every little nook and cranny with this high fidelity rendering that we’re doing, and that translates to gameplay.”

Moreover, players can expect to see their car, at the end of a race, that visually tells them the story of how their day on the track went. It’s not just in damage — who drives a high-performance motorsports sim to beat up beautiful cars, really? It’s in things like the dirt and grime and visual wear that any car will acquire when it drives on the limit, collision or not.

“Internally we call it ‘Shake and Bake,’” Greenawalt said of Turn 10’s damage modeling systems. “It’s a system that allows us to look at the car model in high definition, not at run-time, and create a field map for where the damage and the aerodynamics will happen. And then the game can run in real time to populate those [areas].”

That means the physics of Forza Motorsport aren’t just dedicated to a car’s performance; pockets of high and low air pressure will scatter and gather track grime according to each car’s chassis. Maybe that sounds like overkill, but Greenawalt and Esaki were adamant that this was part of the plan for Forza Motorsport all along; it wasn’t just some eye-candy side effect they discovered in development.

As a technology demonstration, Greenawalt swears Turn 10 didn’t leave anything on the table. Though his studio, along with Xbox’s first-party teams at The Coalition (Gears of War) and 343 Industries (Halo) had plenty of say in the design and hardware powering the Xbox Series X, they were still given a device whose limits weren’t really known internally. Greenawalt said the Forza Motorsport developers went in search of them anyway. “We will always come up with things that the hardware can’t do,” he said.

“That’s not an accusation of the hardware, it’s just the nature of simulating exceptionally complex things. We’re trying to simulate reality,” Greenawalt said. “Like any driver, you give them any machine, they’re going to drive it on the limit.”

Forza Motorsport, the eighth edition of a series stretching back to the Xbox 360’s launch, will arrive later this year for Xbox Series X and Windows PC. Though it does not yet have a release date, the game will be available day one to Xbox and PC Game Pass subscribers.