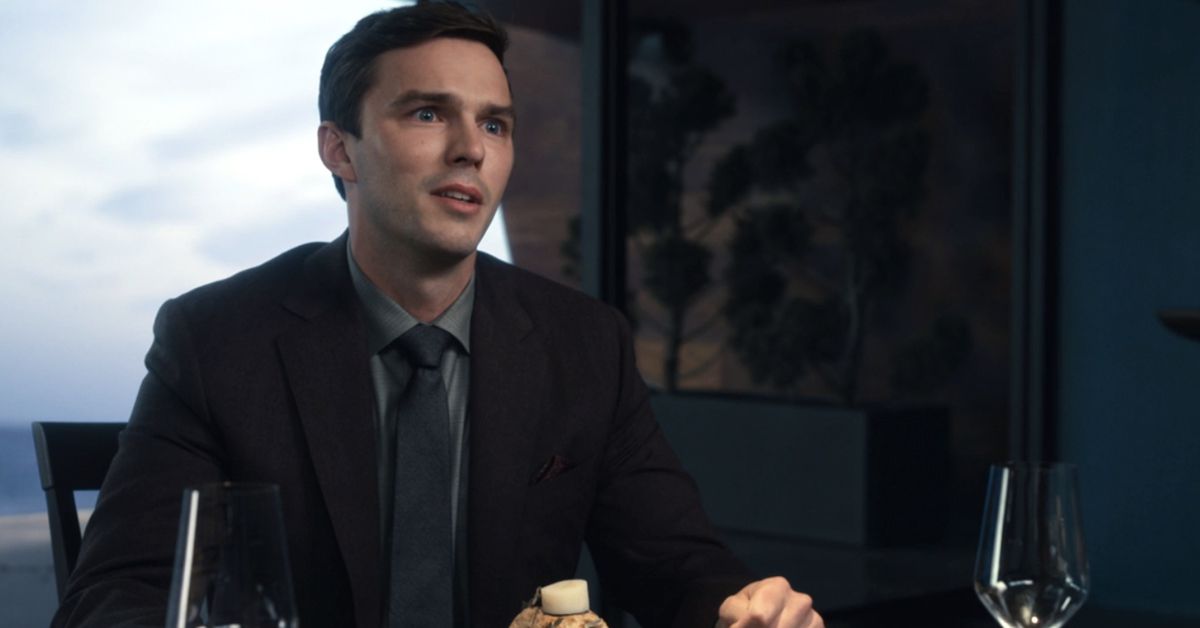 
Buzzy horror-comedy The Menu has been interrogated for its accuracy to the culinary industry and its political bona fides. The madness and misery of Ralph Fiennes’ Chef Slowik are the film’s entry point to both these topics. But by the end, another character in the film exemplifies a third circle in the Venn diagram that has driven the movie’s chef to madness: toxic fandom.

Nicholas Hoult, who plays obsessive foodie Tyler in The Menu, has made a profitable adult career playing bona fide assholes. From his electric performance as a teenager in Skins, where he played a near-sociopathic rich kid who could not stop cheating on his girlfriend, to his remarkably similar performance as Peter III of Russia in The Great, it has become something of a character archetype for him. He returns to the art of being cunty in The Menu — his first lines are him admonishing his date for smoking lest she kill her palate — but the way in which he is an asshole is not just a generalized meanness, but a laser-focused and specific kind of entitlement.

Tyler is just a jerk. Despite being told not to take pictures of the food, he takes pictures. He speaks over people, doesn’t listen when they talk, makes no effort to pay the same care and attention to the staff at this restaurant he valorizes as the care they show to him. In one perfectly hateable moment, he actually snaps at his date when she dares object to her food.

Tyler is a fan of Chef Slowik and of his restaurant, Hawthorne. He is such a fan of this man, and cooking in general, that it has driven him to extreme obsession. And on top of being the kind of person who knows what a Pacojet is and also owns an $8,000 kitchen appliance, he thinks his fandom and his deep knowledge of food make him better than other people. As good as, or perhaps better than, the chefs at his beloved restaurant, even!

In a normal movie, this would be an opportunity for a comedy of errors. In The Menu, it’s a death sentence. Chef Slowik has gathered these diners here on this specific night because to him, they represent the “ruin of his art and his life.” He does not find Tyler’s slavish devotion and pedantic recitation of trivia amusing or flattering. He sees these actions as so toxic that they rob his work of any intrigue.

In the world of video games, one might euphemistically refer to the kind of fandom Tyler has as “passion.” When game development studios find themselves in the crosshairs of fans that are angry at them, they often call those fans “passionate” or may even thank them for their “passion.” When game development studio Beamdog experienced transphobic backlash, the CEO of the company called these fans “passionate.” When developers from Techland were harassed in reaction to a game delay, they went as far as to thank their “passionate” fans for being so “devoted.” When developers at Sony Santa Monica were harassed over release date changes for God of War Ragnarök, they too characterized this behavior as “passion” in a tweet.

The kind of behavior that leads a person to threaten or abuse people is not one that’s powered by passion; it’s powered by the need to possess something. While Tyler’s fandom doesn’t lead him to rise to anger at the chefs, he nonetheless acts like he owns them. Throughout the film he asks anyone who will listen if he can be allowed to speak with Chef Slowik alone, and assumes that every look or gesture is a secret message, just for him, to the point of complaining that chef must be mad at him like a child pleading for his father’s attention. He commands the people in his presence to behave the way he wants them to, in order to properly pay tribute to Slowik and his restaurant. He also pays no attention to the rules that Slowik lays out for him, as if he is so special that he doesn’t have to follow them.

Tyler sees the experience of going to Hawthorne as one that is primarily for him. About halfway through the movie, we also learn that he had full knowledge of the bloody plans for that night’s dinner service, and not only didn’t have an issue with it, but brought a date. After watching the movie a few times, I still can’t decide if he came because he thought the rules wouldn’t apply to him, or that the depth of his fandom would save him.

Ironically, Tyler is the only character that doesn’t complete the full dinner service because Slowik makes a special example of him. Of course, just because you like something a lot, and even know a lot about something, doesn’t mean that you can do it on a professional level.

“You are why the mystery has been drained from our art,” Slowik says to Tyler. “You see that now, don’t you?”

Tyler, whose eyes are glazed over with tears, can only mutter an apology. For all his bluster and bravado at the beginning of the film, he has now been utterly broken. It did not matter how passionate he felt about food, about Hawthorne, or about Chef Slowik. That passion earns a person nothing; in this world, one is owed nothing. To mistake liking something a lot for purpose in life can only lead to the place Tyler is in his final moments of the film — walking ashamed down a dark hallway, having lost your sense of self.