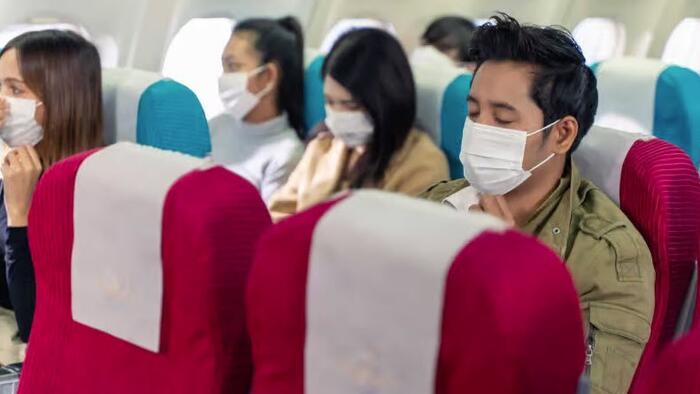 
Authored by Ian Miller via The Brownstone Institute,

In April 2022, a federal judge in Florida ruled that the CDC had overstepped its authority by requiring airlines to mandate masks on domestic flights.

Essentially every company almost immediately moved to make masks optional. Many even allowed passengers, in flight, to remove their masks, to mass celebrations.

The end of the #maskmandate has this plane singing

🎶 Throw away your masks 🎶 pic.twitter.com/BvvCNLE6Ts

It was also a dramatic win for science, as years of data have proven that masks are entirely ineffective at preventing the spread of COVID.

The unfortunate trend of in-flight arguments and fights also dropped dramatically after the court overturned the mandate.

So, not only do masks not work, they actually likely cause significant, potentially dangerous disagreements.

Experts warned that it would lead to a surge in flight cancellations within a few weeks. Naturally, cancellation data showed that the exact opposite situation unfolded.

Additionally, in the nearly nine months since the policy ended, cases in the US have remained low. While the winter of 2021-2022 saw a massive surge of infections with the mandate in place, no such surge materialized through the end of 2022.

But none of that’s stopped the Biden administration from appealing the ruling.

While this might not necessarily mean the immediate return of mandates on planes, it would allow the CDC to retain that authority.

Oral arguments in the case were scheduled for Tuesday, with no indication yet how the appeal will go. But previous statements by the Justice Department show how committed they are to masking.

Despite the inarguable reality that masks do not work to prevent the spread of respiratory viruses, the attorney arguing the case said that they should have the authority to reimpose mandates for future pandemics.

“You can imagine the next pandemic, there was an outbreak of measles or SARS and the CDC would want to and need to take swift action in order to control such a pandemic in the future,” the attorney for the Justice Department said.

“I think the important thing here is that the potential collateral estoppel effect of the district court’s ruling could tie up future CDC actions.”

It’s extremely concerning that the Justice Department apparently believes that masks on planes would be able to “control such a pandemic,” especially measles.

It’s equally concerning that they believe the CDC is competent enough to “control such a pandemic.”

They utterly failed to “control” this one with masks on public transit. On top of their recommendations that politicians enact some of the most draconian restrictions on normal life ever enacted in the United States.

But their lockdowns, masks, vaccine passports and other recommended policies were entirely unable to prevent the spread of a highly infectious respiratory virus.

Yet Biden and his administration are arguing they be allowed to exercise similar, near unlimited control over the freedoms of American citizens regardless.

Thankfully, a lawyer defending the end of the mandate pointed out the obvious; this has nothing to do with public health. He explained that the appeal’s timing shows how little connection it bears to Americans’ health.

Of course, he’s entirely right. This appeal is about politics, not science.

Biden and his team want the ability to enforce mandates at their choosing, even after everyone paying attention has seen how pointless and ineffective they are.

So while it’s hard to say for certain if they would bring back mandates, it’s certainly fair to say that they might.

Yesterday, the 11th Circuit Court of Appeals heard argument in the federal mask mandate case. If you care about this issue, I urge you to read the following from my older and wiser colleague who almost always predicts accurately. It contains some good and bad news:

The CDC creates terrible, poorly conducted research and studies claiming to show that masks work. Judges defer to their research to avoid deciding scientific questions, leading them to side with the CDC. Despite the CDC’s demonstrable ineffectiveness and incompetence.

They refuse to admit they were wrong, and so instead of learning from their overreach and repeated failures, they’re desperately clawing to retain powers they never had.

Given that their utterly ridiculous recommendations on masking persist into 2023, it wouldn’t be hard to believe they’d bring them back at the first sign of a “surge.”

To them, it doesn’t matter how often they’re wrong, it matters that they’re able to tell you what to do.

Republished from the author’s Substack