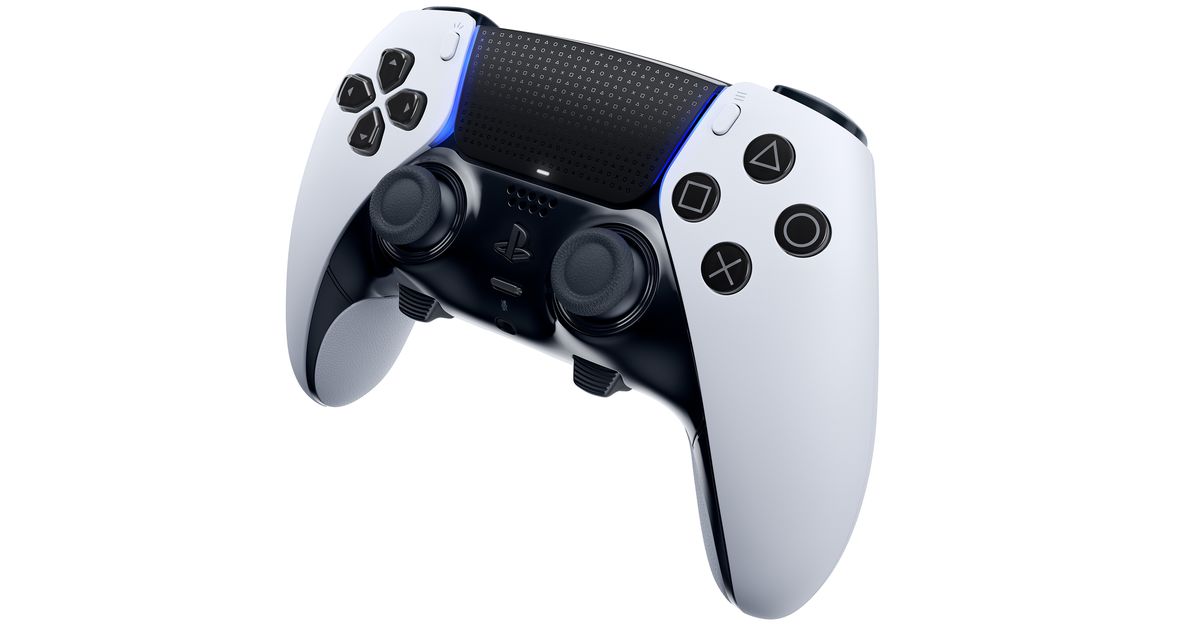 
The demand for high-end console controllers was once filled exclusively by third-party companies like Scuf and Astro, but Microsoft jumped into the fray with its Xbox One Elite controller back in 2015 (with a hardware refresh in 2019’s Series 2). Professional gamers — and serious amateurs — flocked to these gamepads, which genuinely offered an advantage over the competition, thanks to paddles on the back and customizable sensitivity settings for analog sticks and triggers. Given the success of these controllers, it was surprising that Sony only dipped a toe into the same waters with a back-button attachment that slapped onto the PlayStation 4’s existing DualShock 4 controller. Beyond that, though, Sony left the fancy bells and whistles to others.

That all changes with the DualSense Edge, a high-end controller that comes directly from Sony. Launching Jan. 26 at $199.99, it offers many of the features that have made the Elite and other pro controllers so popular: programmable rear buttons and custom profiles, alongside adjustable triggers and analog sticks. But is Sony coming to the party too late?

If you’re already familiar with the PS5’s DualSense controller, you should know that the DualSense Edge comes with all the same benefits: the adaptive triggers, the haptic feedback, and the bizarre microphone/speaker setup that makes you wonder why your controller is talking to you. But there are several notable differences.

The DualSense Edge comes with back buttons in two styles (paddles or half-dome nubs). Despite the four included attachments, there are only two slots for back buttons, so you’ll have to decide which of the two styles you prefer. The paddles will be familiar to anyone who has used an Xbox Elite controller, resting neatly under your natural controller grip, letting you activate them with just a simple squeeze. While this seems convenient, I found myself — both with the Elite controller and with the Edge — accidentally activating the paddles during tense moments of clenching.

That’s why I’m thrilled at Sony’s inclusion of half-dome nubs. They lie just slightly out of reach, allowing you to maintain your natural grip while having two extra inputs accessible with your index or middle finger. They have a satisfying click when activated, and they made an intense fight with God of War Ragnarok’s Valkyrie Queen far easier, letting me keep my thumbs on the analog sticks while dodging and firing arrows with the back buttons.

Sony’s solution for this limited button set is the inclusion of function buttons located below each analog stick. Holding down a function button allows you to select a premade profile. Each profile lets you completely reassign all of the buttons on your controller, including the back buttons, and change the sensitivity and dead zones of the analog sticks.

The most obvious use case: Say you’re playing Spider-Man: Miles Morales, and you want to switch to Call of Duty: Warzone. Your ideal button mappings for each game might be dramatically different. These function buttons let you swap them in an instant — you just hold one down while hitting a face button to select a profile. It’s a very slick process, and the menus for creating new profiles are super intuitive. The Elite Series 2 controller does offer the same functionality, though it’s slightly clumsier there, requiring multiple taps to cycle through the four profiles.

Another feature where Sony essentially matches the Elite Series 2: trigger stops, which let you cut down on how much you need to pull the R2 and L2 triggers before they activate. Using this feature will disable the adaptive trigger functionality, but for serious players, that’s a small price to pay for increased responsiveness and diminished finger strain.

Time to replace the analog sticks?

There is one feature the DualSense Edge includes that the Elite Series 2 does not: the ability to fully replace both analog stick modules. In the era of analog stick drift, the life span of controllers is getting shorter. Sony seems to realize that you probably don’t want to pay for another full-priced DualSense Edge if one of your analog sticks starts acting funny, so the Edge allows you to slide out the entire thing and swap in a new one (sold separately for $19.99).

I feel extremely weird about this feature. On one hand, yeah, it’s great that you don’t have to junk the entire controller — or ship it back to Sony — if an analog stick acts up. On the other hand, this is kind of shouting from the rooftops that these (premium-priced) things are going to break. PS5 owners starting started seeing some DualSense drift issues pretty early in the console’s life cycle, and this functionality feels like Sony acknowledging that modern analog sticks will just fail as a matter of course. And not only that, when they do fail, you’ll have to pay Sony for the privilege of a quick fix, rather than being able to rely on the company having come up with a more durable design in the first place.

The Elite Series 2, the direct competitor to the DualSense Edge, has also had plenty of complaints regarding its durability, with failing bumpers being the most common problem. So I guess that if you’re looking for a first-party pro controller, you’re kinda damned if you do. It’s too early to say whether the DualSense Edge will suffer the same durability issues, which is to say: Maybe wait and see how first wave of controllers reacts to steady use.

What else is in the box?

In addition to everything mentioned above, the DualSense Edge comes with a fancy carrying case that keeps all the bits and bobs secure. Inside, there’s a braided USB cable for charging, a cable lock to prevent untimely unpluggings of your controller (presumably most useful in tournament settings), and a few different styles of analog sticks. If you happen to be one of the people who miss the half-dome analog sticks of the PlayStation era, good news: You’ve got two different heights to choose from in addition to the concave style that comes on all DualSense controllers. (Also: What’s wrong with you? Those analog sticks were horrible.) [Ed. note: No, they were not.]

The carrying case is a nice touch, especially since it has a Velcro door that lets you slide in your USB cable and charge the controller while it’s safe in its cocoon. It all feels very premium and high end, which, for the $200 you’re paying, it should.

What about the design?

It goes without saying that the look of the controller purely comes down to taste. I think the DualSense Edge looks… fine. I don’t think it’s ugly, but I do think it’s a downgrade from the standard DualSense controller, which feels more uniform. The Edge’s most glaring design feature is a patch of glossy plastic around the center of the controller. This is the removable section that grants access to the swappable analog stick modules. I’m not just sure it has the premium look and feel that Sony is generally known for. Given that it’s just a piece of plastic, it wouldn’t surprise me if Sony sold replacement plates in different colors and finishes like the company does for the PlayStation 5 — but it’s a drag that something fancier wasn’t included in the box to begin with.

While we’re talking about the design, Microsoft now allows you to fully customize the look of an Elite Series 2 controller, changing the color of the buttons, triggers, faceplate — you name it. Customized gamepads do come at a premium price ($10 above the DualSense Edge. if you buy all the accessories), but it’s a nice option that Sony is, at present, missing.

The DualSense Edge comes in at $199.99 — half the cost of the digital-only PS5 model. That’s… pretty steep, though it’s not far off from Microsoft’s offering of the Elite Series 2, which is $179.99 (although sales frequently drop it down to around $150). I’m sure that professional streamers and esports athletes will have no problem spending the money and writing it off on their taxes. But for average folk, that a lot to shell out. Does it make playing PS5 games a nicer experience? Unquestionably. Does it give you an advantage to be able to, say, aim and jump at the same time in Fortnite thanks to the back buttons? Yes, it does.

That said, these days I’d be more comfortable buying a high-end premium controller if I knew it was going to last me at least five years. But until we get several hundred hours of gameplay with the DualSense Edge, we won’t really know what sort of life span this thing will have. Given that, it’s harder to make that long-term investment.

Also, again, it’s $200. And it’s not like you’re going to zoom up the leaderboards just because you’ve got two more inputs at your disposal. It’s the epitome of a nice-to-have — but if you play a ton of PS5 games, maybe that’s all you really need to justify it.

The DualSense Edge will be released Jan. 26. This review was conducted using a controller provided by Sony. Vox Media has affiliate partnerships. These do not influence editorial content, though Vox Media may earn commissions for products purchased via affiliate links. You can find additional information about Polygon’s ethics policy here.

Save $100 on the latest iPad Air, which is the one to get