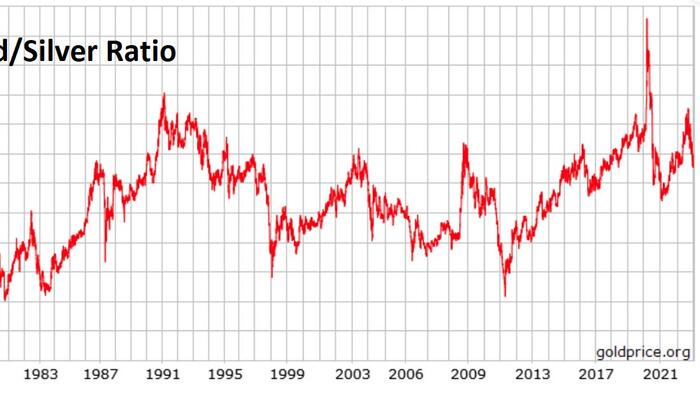 
Authored by John Rubino via Substack,

At first glance, gold and silver seem pretty fungible. They’re both hypnotically pretty. Their prices tend to rise and fall according to the same financial/political forces. They’re both seen as real money by a tiny (very wise) fraction of the population and as atavistic relics by the vast, ignorant majority. And – most important – they will both preserve their owners’ purchasing power when today’s fiat currencies evaporate like the fever dreams they always were.

So you definitely want some (and maybe a lot) of each. But gold and silver are not identical. They have different strengths and weaknesses in various “monetary reset” scenarios. And their prices don’t move in lockstep. Sometimes one is cheap relative to the other.

So how much of each should we own now, and how quickly should we plan to load up the truck? The answer is different for each person, but a few things are generally true.

The relative prices of gold and silver tend to fluctuate within a broad but discernable range. This gold/silver ratio is expressed as the number of ounces of silver it takes to buy an ounce of gold and tends to rise and fall along with the emotional state of precious metals investors. When those investors don’t foresee imminent inflation or other monetary disruptions, they gravitate towards gold’s safety and stability, and shy away from silver’s volatility. Gold’s price rises relative to silver’s, producing a high gold/silver ratio.

When investors expect rising inflation or other kinds of currency instability, they buy precious metals generally, but gravitate towards silver’s greater upside potential. Gold and silver both rise but the gold/silver ratio falls as buyers push silver’s price up more quickly than gold’s.

These fluctuations typically happen within a range of 40 to 80 (i.e., 40 to 80 silver ounces per ounce of gold), with a high number implying that silver is cheap relative to gold and a low number meaning that gold is cheap relative to silver. Breakouts beyond this range in either direction are useful signals.

And extreme readings are very reliable indicators. Note the 15 seconds in 2020 when the ratio spiked to 120 (as silver’s price fell to $13/oz and it took 120 ounces to buy an ounce of gold). That was a great time to buy silver, as it outperformed gold dramatically in the next few months.

Currently the ratio is around 75, which implies that silver is modestly undervalued and stackers should favor it over gold in the near term.

Why is silver so much more volatile than gold? Because it’s a much smaller market. Most of the gold ever mined is still around in the form of bars and jewelry. Silver, in contrast, is used in industrial products and is frequently not recycled. The result is a world with far more above ground gold than silver, in dollar terms. So it only takes a small amount of new investment demand flowing in or out of silver to move its price dramatically.

Different roles in a crisis

In most monetary reset scenarios, gold and silver will both soar in value and will be useful for buying things. But different things. A few ounces of gold will buy a used car, while one or two silver coins will buy a week’s worth of veggies at the farmers’ market. Both transaction categories are important, which is why you want some of each metal.

If you have to leave the country in a hurry, gold coins are easy to transport. 10 1-ounce Gold Eagles will fit into a shoe buried in a suitcase and will be valuable enough to bribe plenty of border guards. The same buying power of silver would weigh 37 times as much at today’s exchange rate and would fill up a big part of a suitcase.

It’s pointless to go to all the trouble of stacking precious metals if the government is just going to swoop in and take it all away. This happened with gold in the 1930s, when the US made private gold bullion ownership illegal. Will they do it again? Probably not, because in the 1930s gold was the world’s money, while today it’s classed as a commodity. But if a growing number of countries start backing their currencies with gold and threatening the dollar’s hegemony, things might change.

Silver is probably immune from confiscation because it’s an industrial metal that thousands of businesses buy, sell and hold in inventory. Banning or restricting ownership of it would prohibitively disruptive.

So it comes down to your expectations. Will you bug out or hunker down in a SHTF scenario? If the former you may want to favor gold; if the latter, silver. If you’re not sure, and want to prepare for both possibilities, the gold/silver ratio implies a 60%-40% silver/gold mix (in terms of dollar value) at current prices.

How much gold and silver should you own?

Here’s where the culture clash begins. Traditional financial planners will say zero percent of your net worth should be in pointless rocks that haven’t been money for decades. More flexible traditional financial planners will humor you with 1 or 2 percent in a gold ETF like GLD (DO NOT do this, for reasons to be explained in a later article). Cautious crisis-investing gurus like Jim Rickards (to be profiled in a future article) recommend 10%, which is reasonable. A more aggressive but still reasonable mix would be 10% of your investible funds in physical precious metals and another 10% in gold/silver mining stocks (again, to be explained soon).

As for how quickly we should get this done, there are lots of crosscurrents. The Fed is either going to keep tightening until something breaks, which might pull precious metals prices down along with everything else (so no hurry). Or the Fed will capitulate after the next batch of terrible economic reports, igniting a relief rally that sends gold and silver to the moon (so now or never).

Leaving the inherently unpredictable Fed out of the equation, we’re moving into the weakest season for precious metals (yes, they’re seasonal). Asians, especially Chinese and Indians, like to give gold and silver jewelry as wedding gifts, since they correctly view such things as portable wealth. Most Asian weddings are in the Spring, which leads jewelers in those countries to buy their inventory in the Fall and early Winter. The result is generally rising gold and silver prices September through January, and languishing prices in the later Spring and Summer. The following chart (courtesy of Jeff Clark’s Gold advisor) illustrates the pattern.

To sum up, it’s anybody’s guess what gold and silver will do in the coming six months. Faced with that kind of uncertainty, dollar cost averaging, i.e., buying the same dollar amount of metal each month, is probably the best approach. Let your own sense of urgency determine the monthly amount.