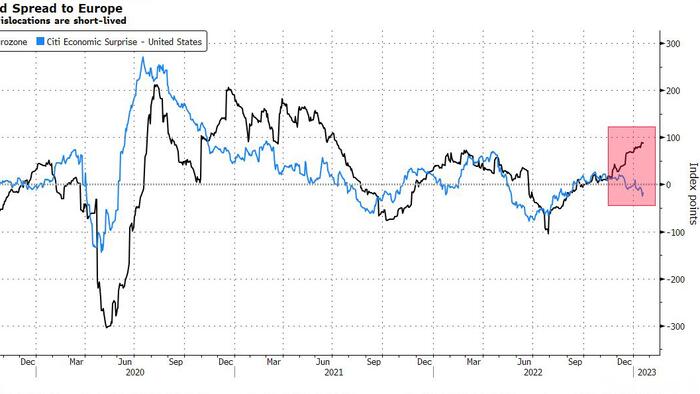 After nearly four months of brisk gains, the European equity rally is starting to look stretched. Investors should watch out for some overheating in the short term.

The Stoxx 600 hit overbought levels last week for the first time in more than a month, while the breadth of its index members trading at such levels reached the highest since November. The last such occurrence was followed by the European benchmark dropping about 4.5% on a closing basis, before resuming gains.

China’s accelerated reopening, receding bond yields and a weaker dollar have all helped the rally, while Europe has also seen better-than-expected macro data, in contrast with the US. Preliminary reports on European PMIs due Tuesday may offer clues on whether the region’s resilience can be sustained amid rising rates.

“We expect a sharp loss of growth momentum in response to aggressive monetary tightening, but markets are not priced for this,” says Bank of America strategist Sebastian Raedler. “European equities look particularly vulnerable, as a pro-cyclical, pro-value market that has already strongly outperformed.”

Barclays strategist Emmanuel Cau points out that disinflation bets have dragged bond yields lower in Europe despite a hawkish ECB, while improving economic sentiment has pushed up equities. “Europe appears to be in the sweet spot right now,” he says, but adds that “if the macro situation in the US were to deteriorate more, history suggests the decoupling between the two markets may not last long.”

If US data continue to weaken, worries of a hard recession are likely to hit European stocks too. “US economic data downside surprises are occurring against a labor market which continues refusing to roll over and placate the FOMC into thinking that their work is done – hence, the ultra-rare sighting of a ‘bad news is bad news’ market regime,” says Nomura cross-asset strategist Charlie McElligott.

Volatility measures also indicate it may be a good time for investors to secure some of the year-to-date gains. Both the VVIX and SKEW gauges are on the rise, while the VIX itself bounced above 20 last week, a key level that was followed by higher volatility last year. That offers a relatively cheap hedging opportunity.

Equity strategists on average predict the Stoxx 600 will end the year near current levels, but it may take a bumpy path to get there. While the consensus at the end of last year was that the first half of 2023 will be rougher than the second half, that’s being challenged by the favorable conditions that have led to European stocks’ best-ever start to a year.

“We could almost have some kind of Goldilocks scenario in the first half,” says Argonaut fund manager Barry Norris, expecting a tougher second half. Norris says Europe got lucky with a mild winter that eased energy woes and helped the region avoid recession, but warns that things will be different in three to six months, when investors will think the bull market is back and inflation re-accelerates.