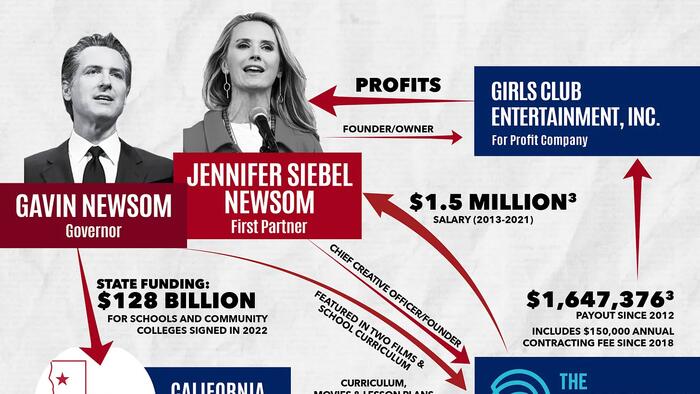 
By Adam Andrzejewski of Open the Books Substack

FLOWCHART: How Jennifer Siebel Newsom used taxpayer dollars to trade with herself, her nonprofit organization, and her for-profit business. The organization refused to disclose how much of their screening revenues came from California public schools.

California Governor Gavin Newsom and his wife, Jennifer Siebel Newsom, are the dream team. He runs the state and she’s a nonprofit founder, entrepreneur, and filmmaker.

While her husband attends to state business, Siebel Newsom engages in her passion: advancing “gender justice” through her charitable nonprofit The Representation Project. According to tax documents the organization is “committed to building a thriving and inclusive society through films, education, and social activism.”

We previously reported that while the governor engaged in the highly unethical practice of soliciting 1,000 state vendors for $10.6 million in campaign cash, the first partner, Jennifer Siebel Newsom, solicited state vendors and the governor’s campaign donors for large gifts to her charity, The Representation Project.

However, Newsom’s charity shouldn’t have been soliciting anyone for donations throughout most of 2022.

Last week, our investigation broke the story that The Representation Project was not in compliance with the California Charitable Solicitation Act. Now, it’s clear that the charity spent last year engaged in big-money fundraising events with corporate executives and philanthropists – while its charitable filings were delinquent with the state.

Then, the Newsom nonprofit scrambled to submit their proper registration. Working with the California Attorney General, a process that normally takes days or weeks was completed in hours.

So, just what does Jennifer Siebel Newsom’s charity do – with the full support of her husband, the governor, and underwritten by the wealthy California establishment?

Siebel Newsom, through her non-profit The Representation Project, has released four films advocating gender justice. The films are leased for screenings to individuals, corporations, and schools, and come with their own lesson plans. Schools spend between $49-$599 to screen these movies to children.

Jennifer Siebel Newsom is credited as a writer and director on each of these films. Two of the movies feature Gavin Newsom himself, and many of the lesson plan activities are oriented toward engaging children in social and political activism.

Because of Gavin Newsom’s role in these films and because licenses are sold to schools which the governor is responsible for funding with tax dollars, auditors at OpenTheBooks.com felt the organization deserved further scrutiny.

Tax records show that since 2012 the nonprofit has generated $1,483,001 in film screening revenue, although it is unclear how much money came from schools versus other sources. We asked The Representation Project for the number of California schools that purchased a screening license and received no response.

Auditors at OpenTheBooks.com watched Newsom’s movies and read the lesson plans. What we found was, at times, shocking: sexually explicit images, political boosterism, and something called “The Genderbread Person.”

Miss Representation’s curriculum links to “age-appropriate” video clips in its K-12 lesson plans and says that the full film is rated PG-14. (Certainly, parents may still object to clips from the “age-appropriate” film like the animated, upside down stripper shown above).

Then, it gets worse.

Newsom included images of naked or mostly naked women being slapped, handcuffed, and brutalized in pornographic videos. The pictures are graphic even when blurred. Screenshots of those scenes can be found HERE (VIEWER DISCRETION IS ADVISED).

However, 100% of the youth (or anyone else) receive unwanted or unwarranted pornographic exposure by watching Newsom’s movies.

In 2019, one parent filed a complaint about a screening of The Mask You Live In for his 12-year-old daughter’s class at Creekside Middle School in California. In an interview with The Sacramento Bee the father said,

“Some of the images when slowed down were not blurred, and even when they are blurred, it is obvious what is going on. It is absolutely profane and disgusting.”

An investigation found a substitute teacher accidentally screened the full version of the film rather than an “age-appropriate” version. However, The Representation Project recommends the full version for ages 15+.

Siebel Newsom’s idea is to protect children from highly exploitative and disturbing sexual media content seems to involve showing it to them personally.

Newsom speaks three times in Miss Representation and is portrayed as a champion of women’s rights—see this example from the middle school curriculum video (18:37):

Getting paid by schools to portray your politician husband as a standup guy to captive children in the classroom was such a winning idea, Siebel Newsom deployed it again in The Great American Lie.

At the end of the day a budget is a set of values, budget reflects your values.”

“This notion of interdependence—that we’re all in this together, that we all rise and fall together—is absolutely true.”

“We’re not bystanders in this world, we have the ability to step up and solve big problems, we have done that in the past, it’s just a question of prioritization, of political will.”

Siebel Newsom’s provided companion curriculum require student discussion of Gavin Newsom’s points and are told to vote, and help others vote, for politicians “who show empathy through their support care [sic] policies.”

Activity from The Great American Lie curriculum for high school and college students. Students are asked to watch and discuss a clip of Gavin Newsom.

Call to action from The Great American Lie curriculum for high school and college students. Students are told to vote and help others vote for candidates “who show empathy through their support care [sic] policies”

Overview: Jennifer Siebel Newsom makes a movie portraying Gavin Newsom as a politician that supports certain policies, and then in the movie’s curriculum advises students to vote and campaign for politicians that support those policies.

Schools, which receive funding from the state, pay The Representation Project to show this movie, and use taxpayer-funded class time to facilitate these lessons.

In July 2022 Gavin Newsom signed a budget of $128 billion for state schools and community colleges.

One such lesson for middle and high schoolers includes the “genderbread person,” who aims to show children how biological sex, “gender expression,” “sexual attraction,” and “gender identity” exist on a spectrum, which can be mixed and matched.

While kindergarteners are spared the genderbread person in their curriculum, they are offered similar lessons on “gender identity,” introducing genders other than “boy” and “girl.”

Kids forced to watch The Representation Project films in schools aren’t just subjected to gender ideology, sexually explicit images, and Gavin Newsom’s one-liners. They’re being given a left-wing framework through which to see the world, and then prompted to conduct social and political activism.

In The Great American Lie curriculum, students are asked to do a “privilege walk,” divulging personal information in order to compare themselves to peers inside and outside the classroom. “Privileges” include being “a cisgendered man,” “white,” “born in the United States,” “straight,” and speaking English as a first language.

Activity from The Great American Lie curriculum for high school and college students.

Journalist Charles Blow, who is now a New York Times opinion columnist, said during the film:

The way to relieve this shame, according to the film, is through social and political activism, as Professor Niobe Way said:

“If you don’t address the racism, sexism, homophobia, hatred―the hatred―we have in our culture, then you can’t start having a conversation about love, peace and understanding.”

Newsome and her non-profit recommends The Great American Lie for ages 11+.

Curricula from the three available films advise diverse ways for students to become activists within their families and communities. Suggested activities include promoting The Representation Project social media campaigns, voting for candidates that “support the care economy,” and asking students to “market and host a screening” of The Representation Project films (while paying a screening fee to the organization).

Jennifer Siebel Newsom produced, wrote, and directed all these films, but if her enthusiasm for cultivating young activists was not obvious enough, we need only listen to her conclusions.

In 2021 high school participants in The Representation Project’s film course joined a moderated panel with Siebel Newsom to discuss The Great American Lie.

One student stated: “There’s no age limit for activism… the younger you are the easier it is for you to see these changes that need to be made.”

The Representation Project not only solicits donors from big-money political supporters of Gavin Newsom, but also receives public tax dollars through schools to create a new generation of supporters and activists in the state’s—and country’s—schoolchildren.

Since The Representation Project’s founding she has collected $1,501,727 in salary. Her current title is Chief Creative Officer, and she also sits on the nonprofit’s board of directors. She is the top paid executive at her non-profit with a $150,000 annual salary between 2013 and 2021.

Siebel Newsom also founded a for-profit company, Girls Club Entertainment Inc., which contracts (with Newsom’s nonprofit) for the production costs associated with the movies and owns the license for Miss Representation.

According to tax records, the nonprofit (The Representation Project) has paid Girls Club Entertainment (Newsom’s for-profit company) $1,647,376 since 2012.

NOTE: We requested comments from Jennifer Siebel Newsom and her nonprofit, The Representation Project multiple times over the last couple of months. We also requested comment from Gov. Newsom. We never received any response.