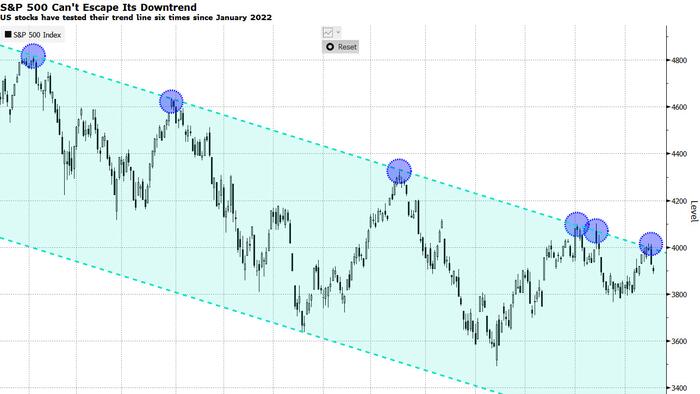 
With market narratives flip-flopping on a daily basis like a dying fish, bouncing from bullish to bearish and back again driven purely by price action which in turn is a function of technicals, it is easy to forget that there is a fundamental case for risk. And while the bullish case is simple – the market sees the Fed cutting over 200bps in the next two years (realistically, much more) even as the Fed vows to keep rates higher for longer…

… there is also a substantial bearish case that can be made, and that’s what Bloomberg Markets Live strategist Ven Ram has done, pointing out that stocks have not only failed to breach the seemingly insurmountable technical resistance of the the S&P’s descending channel…

… or the huge pin at 4,000, but that to rally meaningfully, stocks must promise three things:

And while “if you combine all three of those, you would get an astounding year”, Ram cautions that it is unlikely we get one let alone all three, as he explains in his note below:

Break free. US stocks have been attempting to do that innumerable times in recent months, though it seems like the optimists want to cross over the Atlantic on the slender wings of a fruit-fly.

To rally meaningfully, stocks must promise an improved income return. Or a considerable nominal increase in earnings, meaning companies should be able to pass on inflation to consumers. Or investors should fundamentally be willing to pay more the same set of earnings, all else being equal — a re-rating, in other words.

Of course, if you combine all three of those, you would get an astounding year.

For all those who stick a finger in the wind and posit a higher S&P, I wonder what gives.

An improved income return would stem typically from buoyant dividend yields, though the news here is grim. The current estimated dividend yield on the index is around 1.75%, below the average of about 2% since the start of the millennium.

As for earnings, assuming even a shallow recession this year as the base case, it’s hard to project meaningful real earnings growth, let alone nominal.

Which brings us to a possible re-rating, which is where the bulk of optimism seems to rest.

The Fed has said more times than anyone would care to hear that it doesn’t envisage slashing the benchmark rate this year. The markets are adamant the monetary authority will — essentially a bet that the estimated earnings yield of some 5.75% on the S&P 500 will get a leg-up based on its relative allure versus Treasury yields.

Yes, inflation is slowing, but is it going to crumble all the way to 2% that the Fed will throw caution about inflation to the winds and instead begin to accommodate the economy? I am not holding my breath.