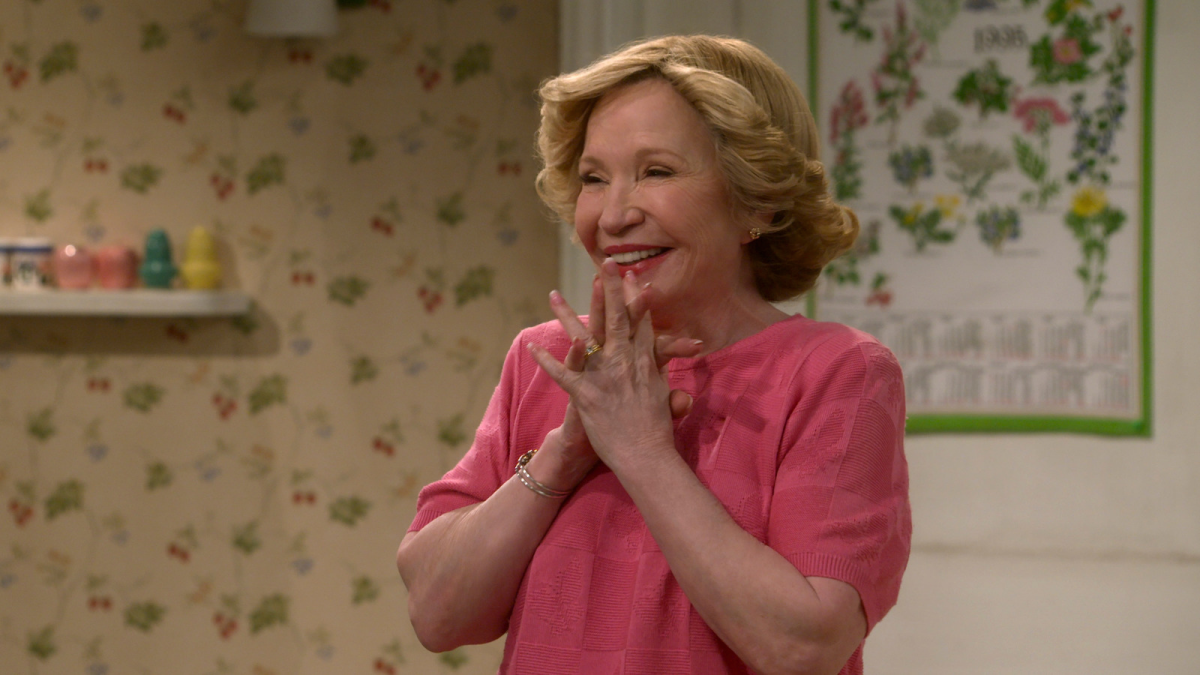 
If you found yourself crying at That ’90s Show‘s coming-out scene, you’re not alone. The touching exchange between Kitty (Debra Jo Rupp) and Ozzie (Reyn Doi), a new friend of Leia (Callie Haverda) — Eric (Topher Grace) and Donna’s (Laura Prepon) daughter — has quickly risen in the “Kitty Forman Best Moments” Hall of Fame.

Through brilliant line delivery courtesy of Rupp, That ’90s Show‘s coming-out scene was arguably one of the most refreshing I’ve ever seen. It’s also a reminder of why Kitty Forman is one of the best TV moms ever, and why she’s the heart of That ’70s Show (and That ’90s Show).

Ozzie comes out to Kitty, and her reaction is as sweet as you’d expect it to be.

Ozzie’s got a 16-step coming-out plan, and he’s on step seven: coming out to an adult you see all the time. He decides to help Kitty with setting up a computer at home so he can use that quality tech time to tell her. His initial plan, telling her though an email, quickly fails when Kitty hilariously shuts off the computer instead of double-clicking – bless her. That leaves him with no choice but to tell her directly, also mentioning his Canadian boyfriend, Etienne.

Kitty is silent for a second before saying that she’s not OK with it. It’s an immediate, gut-wrenching proclamation that she quickly overturns by explaining that she simply doesn’t trust Canadian men — a hilarious twist that’s so on brand for her character. In a matter-of-fact tone, she reassures Ozzie that she’s fine with him being gay. Of course Kitty Forman would be an ally; we’re all so silly for thinking otherwise.

She gives Ozzie a hug and tear-jerkingly says: “You just made me feel really special.” Kitty starts crying. I start crying. And now we’re all crying. While many coming-out scenes lean toward drama and shock, Kitty and Ozzie’s is a moment loaded with unconditional love and support. They’re in an environment set up to be hostile: It’s the ’90s, and it’s a small town in Wisconsin. Yet her reaction is immediate acceptance with no questions asked, no “Is it just a phase?” response for a tired gag. She immediately took him as he is.

Yes, it’s a big moment for anyone, but That ’90s Show beautifully makes it a big moment of trust before revelation. It’s not about the drama of Ozzie being gay, it’s about him finding a unique companion in Kitty — a grandma in Wisconsin who’s come to be a maternal figure for all these kids out of the pure love in her heart.

Coming out is never an easy thing to do in real life, but I hope That ’90s Show set a small blueprint and a green light for more scenes showing support and love — and more support and love for these moments in the real world, too. Just as it’s important to celebrate queer characters themselves on TV, we should also celebrate queer support systems.

A love letter to Kitty Forman: The heart of That ’70s Show. Kitty’s spent season upon season building a home for these generations of kids. She’ll make them piles of food, buy them their favorite snacks, and give them practically anything if it makes them happy. Kitty’s love language is showering everyone around her with her giving, and Ozzie coming out to her was a huge “You’ve done right” moment. She’s succeeded in her main goal: to build a safe space for all these kids to hang out. It’s time to give Kitty Forman her dues.

Throughout That ’70s Show‘s long run, cast members have dipped in and out. New characters have been introduced, old ones have left, spin-offs have been made. Through it all, Kitty — and Red (Kurtwood Smith) — remained constants. You can always count on seeing them together in the kitchen, taking care of all these kids in their own special way, wine and beer in hand and quips right under their belt.

They’re honestly the best part of the show. Whether it’s her unwavering love for five o’clock booze or her arms always being open for a tight hug, Kitty is the definition of a hilariously loving and sometimes overbearing mom just trying to do her best. I think she’s finally done it.

That ’90s Show is now streaming on Netflix(Opens in a new window).