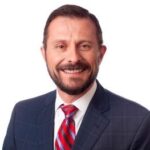 Kinion joined the Oklahoma Insurance Department in 1995 as counsel to the Oklahoma State Board for Property and Casualty Rates and as an assistant general counsel. From 2001 to 2008, he served as the board of directors chairman for the Oklahoma Health Insurance High-Risk Pool. He is a former chair of the American Bar Association Insurance Regulation Committee and a Federation of Regulatory Counsel member. He served more than 30 years in the U.S. Army Reserve, retiring in 2017 as a lieutenant colonel.

Captive Review magazine has named him multiple times to its “Power 50” of the global captive insurance industry. He holds the Associate in Captive Insurance (ACI) designation, the highest professional designation for captive insurance. Fewer than 650 persons in the world have earned the ACI.