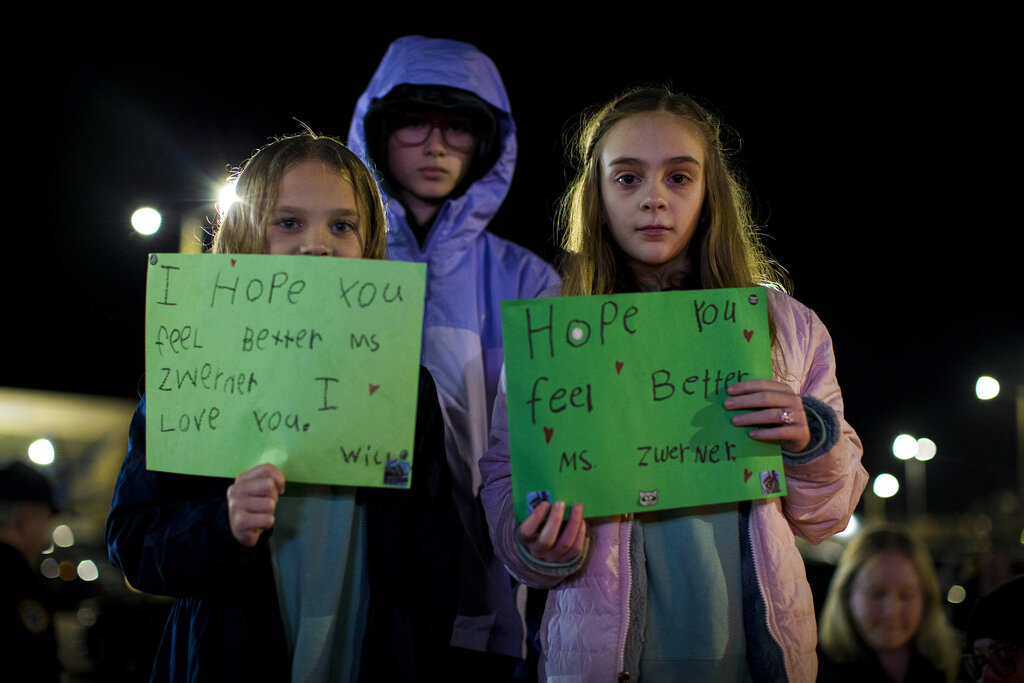 NEWPORT NEWS, Va. (AP) — When a 6-year-old shot and wounded his first-grade teacher in this shipbuilding city near Virginia’s coast, the community reacted with collective shock.

But the sentiment has percolated into rage from parents and particularly from teachers, with many lambasting school administrators Tuesday night for what they called a misguided emphasis on attendance and other education statistics over the safety of children and staff.

The anger in Newport News is bubbling up during a decades-long pendulum swing that’s been moving American schools away from suspensions and expulsions, experts say. But some school systems are still seeking a “happy medium” between strict discipline and a gentler approach.

During a three-hour school board meeting dedicated solely to public comment, Newport News teachers and parents said students who assaulted classmates and staff were routinely allowed to stay in the classroom with few consequences. They said the shooting of Abigail Zwerner could have been prevented if not for a toxic environment in which teachers’ concerns are systemically ignored.

“Every day in every one of our schools, teachers, students and other staff members are being hurt,” high school librarian Nicole Cooke told the board. “Every day, they’re hit. They’re bitten. They’re beaten. And they’re allowed to stay so that our numbers look good.”

Addressing superintendent George Parker, Cooke said: “If Abigail had been respected, she wouldn’t be in the hospital right now.”

Zwerner was shot Jan. 6 as she taught her first-grade class at Richneck Elementary. There was no warning and no struggle before the 6-year-old pointed the gun at his teacher and fired one round, police said.

The bullet pierced Zwerner’s hand and struck her chest. The 25-year-old hustled her students out of the classroom before being rushed to the hospital.

Newport News police said the 6-year-old’s mother legally purchased the gun but that it was unclear how her son gained access to it. A Virginia law prohibits leaving a loaded gun where it is accessible to a child under 14, a misdemeanor crime punishable with a maximum one-year prison sentence and $2,500 fine. No charges have been brought against the mother so far.

Community reaction shifted into anger late last week after the superintendent revealed that Richneck administrators had learned the child may have had a weapon before the shooting. But a search did not find the 9mm handgun despite staff looking through his bag.

Zwerner’s shooting was “completely preventable — if the red flags had been taken seriously and proper procedures clearly communicated and followed,” Amber Thomas, a former school psychologist in Newport News, told the board.

Thomas left the school system last year after working there for a decade. In an interview with The Associated Press, she recalled a time when a “teacher was assaulted by a student _ and that student faced no disciplinary action at all.”

“A school counselor and I were often called to intervene with explosive behaviors,” said Thomas, who served three elementary schools at a time, although not Richneck. “And the administrator would see what was going on and turn around and walk the other way.”

Cindy Connell, a middle school teacher who also addressed the board, told the AP that school system leaders fear angering parents and are too focused on limiting discipline such as suspensions.

They’re afraid, she said, that pulling kids out of the classroom will imperil a school’s accreditation.

“Our administrators are under an intense pressure to make everything appear better than it is in reality,” Connell said.

Zwerner’s shooting did not shock Connell.

Michelle Price, a spokeswoman for the school board, did not immediately respond to an email from The Associated Press asking for comment on the various criticisms expressed Tuesday night.

William Koski, a Stanford law professor and director of the school’s Youth and Education Law Project, said many schools in the U.S. had strict zero-tolerance discipline policies in the 1990s, but began to depart from that approach about a decade later, as concerns grew that suspensions and expulsions were failing to help students, while feeding the school-to-prison pipeline and disproportionately affecting Black children.

“If you get expelled a lot, you are just more likely to head down that path, to not graduate, to end up not being a very productive person,” Koski said.

Educators have shifted to a gentler approach that focuses on creating a safe and positive school climate, while zeroing in on the root causes of behavioral problems.

Koski said he understands the frustrations of teachers in Newport News and elsewhere. He said that some school systems may still be in search of a “happy medium” between the two approaches.

But Republicans in Virginia’s House of Delegates appear to want to push the pendulum back. A bill filed last month would require the state Department of Education to establish a uniform discipline system for students. It would include criteria for teachers to remove disruptive students from class, while making removal mandatory if the behavior is violent.

Newport News is a racially diverse city of about 185,000 people — about 45% white and 41% Black — that sits along the James River near the Chesapeake Bay. It’s probably best known for its sprawling shipyard, which builds the nation’s aircraft carriers and other U.S. Navy vessels.

About 15% of the population lives in poverty, according to U.S. Census data. More than 400 of the nearly 1,000 incidents of violent crime in the city in 2021 involved a handgun or firearm, according to FBI statistics.

“Gun violence has become a constant for our students,” William Fenker, an eighth-grade science teacher, told the board. “It has been a salient issue in our community for some time now … (and) has even made its way into our schools.”

Newport News schools have endured two other shootings in a little over a year.

In September 2021, two 17-year-old students were wounded when a 15-year-old boy fired shots in a crowded high school hallway after he had a fight with one of the students.

Two months after that shooting, an 18-year-old student fatally shot a 17-year-old in the parking lot of a different high school after a football game. Police said the teens exchanged “gestures” in the gym before an altercation broke out.

“Our students do not wonder if there will be another school shooting,” Fenker told the board. “They wonder when and where the next shooting will be.”

Last week, the school board announced that 90 walk-through metal detectors would be placed in schools across Newport News, starting with the one where Zwerner was shot.

But that failed to satisfy many parents at Tuesday night’s board meeting.

Doug Marmon, who has two children in school, called for the removal of the school system’s executive leadership and for many more security measures. He also wants the system to change how it addresses bad behavior.

“Students need to be held accountable for their actions, regardless of age or circumstances — not transferred to another school or placed in a different classroom,” he said.

Another parent, David Wilson, said the problem starts at home. But he also questioned the impact of removing children from the classroom.

“We can do what everybody wants to do — we can start suspending more kids, sending them home,” Wilson said.

“So you just prevented a school shooting but you just caused a 7-Eleven shooting,” he said. “You didn’t solve the issue. You shifted the issue from one thing to another.”

Copyright 2023 Associated Press. All rights reserved. This material may not be published, broadcast, rewritten or redistributed.