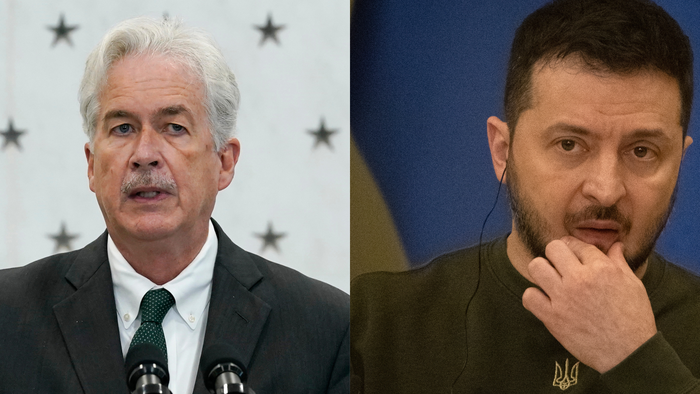 
The Washington Post revealed in a bombshell Thursday evening report that CIA Director William Burns made a secret trip to Ukraine’s capital last week to give a personal briefing to President Volodymyr Zelensky on what can be expected from Russian military strategy and Putin’s likely vision for the war in the weeks and months ahead.

“Director Burns traveled to Kyiv where he met with Ukrainian intelligence counterparts as well as President Zelensky and reinforced our continued support for Ukraine in its defense against Russian aggression,” one US official confirmed to the Post.

While in prior months, particularly the summer, it might have been expected that such a high level trip by the head of America’s top intelligence agency to Kiev might have had as top of the agenda discussion of ways forward for negotiated peace, increasingly Washington is talking a “win” – or at least enough clear battlefield leverage for Ukraine to come away with victory at a future negotiating table. Part of this is the current push to get heavier US and NATO weaponry to Ukraine as fast as possible.

Crucially, there’s no mention in WaPo’s coverage of the Burns trip that opening a pathway for ceasefire talks was at all a point of discussion with Zelensky. This as the bloody battle for Bakhmut reportedly is resulting in immense casualties for both sides.

Instead, “Top of mind for Zelensky and his senior intelligence officials during the meeting was how long Ukraine could expect U.S. and Western assistance to continue following Republicans’ takeover of the House and a drop-off in support of Ukraine aid among parts of the U.S. electorate, said people familiar with the meeting,” the Post writes. And importantly:

“Burns emphasized the urgency of the moment on the battlefield and acknowledged that at some point assistance would be harder to come by, the people said.”

Currently the Biden administration is finalizing another some $2.6 billion in military aid to Ukraine. Though it will include a reported 100 Stryker combat vehicles and at least 50 Bradley Fighting Vehicles, the US is expected to continue refusing to send M1 Abrams tanks.

On Wednesday the White House’s undersecretary of defense for policy Colin Kahl presented this as based on specific battlefield strategy. “What we’re trying to look at is the mix of armored and mechanized forces that make sense,” he said, explaining that “The Russians are really digging in. …They’re digging trenches, they’re putting in these dragon’s teeth, laying mines. They’re really trying to fortify that that FLOT, that forward line of troops.” Kahl continued.

“To enable the Ukrainians to break through given Russian defenses, the emphasis has been shifted to enabling them to combine fire and maneuver in a way that will prove to be more effective,” Kahl added.

One possible reason for the sudden rush of heavier weaponry to #Ukraine: “Burns emphasised the urgency of the moment on the battlefield and acknowledged that at some point assistance would be harder to come by” https://t.co/XquLjITu6t

Likely, Burns’ briefing to the Ukrainians emphasized this. As for the reference to Burns reportedly informing Zelensky that at some point assistance would be harder to come by, this suggests the US still doesn’t see Ukraine’s path forward as one of an outright military “win” involving the regaining of all pre-Feb.24 territory, but instead would reflect something more like what the CIA director said in a PBS interview last month…

“Most conflicts end in negotiations, but that requires a seriousness on the part of the Russians in this instance that I don’t think we see,” Burns said at the time. “At least, it’s not our assessment that the Russians are serious at this point about a real negotiation.” Thus for the time being it’s all about battlefield leverage to gain the most spoils whenever that final negotiated settlement does come. But then again the ‘alternative’ is a major great power war, which the world may already be witnessing the beginnings of.