While there is a similar momentum in the market, the largest altcoin has a more seller-weighted horizontal outlook this week. While Ethereum moved toward $1,600 during the week, the support at $1,500 has solidified for now.

Last week, the crypto market, buoyed by the US data, saw steep rises. This week, the view that the impact of the CPI data remained limited as  were lower than expected dominated the market. The risk appetite decreased slightly.

On the other hand, this week’s negative developments in the crypto industry dampened the upbeat mood. The market was nervous when the US Department of Justice was due to make an important announcement. However, the announcement of the seizure of the Hong Kong-based Russian crypto exchange, an operation that has been going on since September, eased investors’ nerves a little. Still, the alarm sounded by the US DOJ was noteworthy.

Late yesterday, the of the bankruptcy of Genesis, one of the biggest companies in the crypto sector, shocked the market. However, for now, the negative impact of this remained limited.

Bitcoin has struggled to break through the critical resistance zone at $21,300 this week. Bitcoin buyers, who have passed all resistance zones without any problems until coming across this area, have reduced their activity as the price settled near $21,000.

The consolidation may continue as the profit-taking ensues after a steep rally. In a possible correction, the $20,500 – $20,000 range currently stands as the closest support zone. Below that level, the $19,200 and $18,500 levels may be the next support zone.

If Bitcoin manages to hold the initial support zone during the weekend trading, the coming week could see an increase in buying volume. And this time, above the $21,300 resistance, BTC could move towards the $22,800 – $24,700 range.

On the daily chart today, the short- and medium-term EMAs have a bullish alignment that is ideally positioned. This is the first time since March 2022 that a fast-to-slow pattern has formed near the average, which is extremely important for the uptrend.

However, if the Bitcoin price closes the day below $20,500, the possibility of the bullish setup breaking down starts to increase. In summary, the direction out of the $21,300 – $20,500 range will be carefully monitored for Bitcoin in the coming days.

Ethereum bounced after falling as low as $1,500 in midweek. The sideways movement continued until the crypto moved back up to the $1,550 level.

The $1,510 to $1,520 range remains the closest support zone for Ethereum. If buyers manage to keep the cryptocurrency above this region, movements toward the $1,600 band will be monitored, and a daily closing above this value can be interpreted as a continuation of the bullish movement. 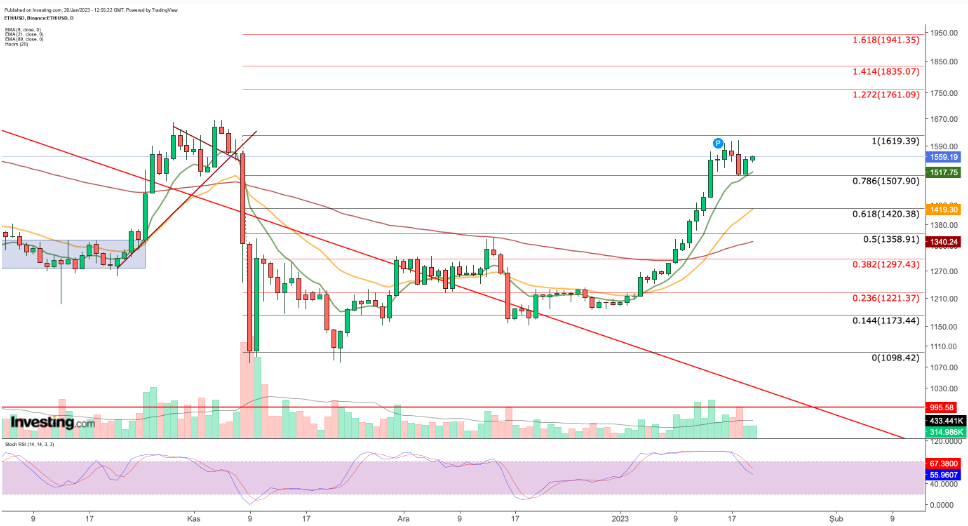 Disclosure: The author does not own any cryptos.