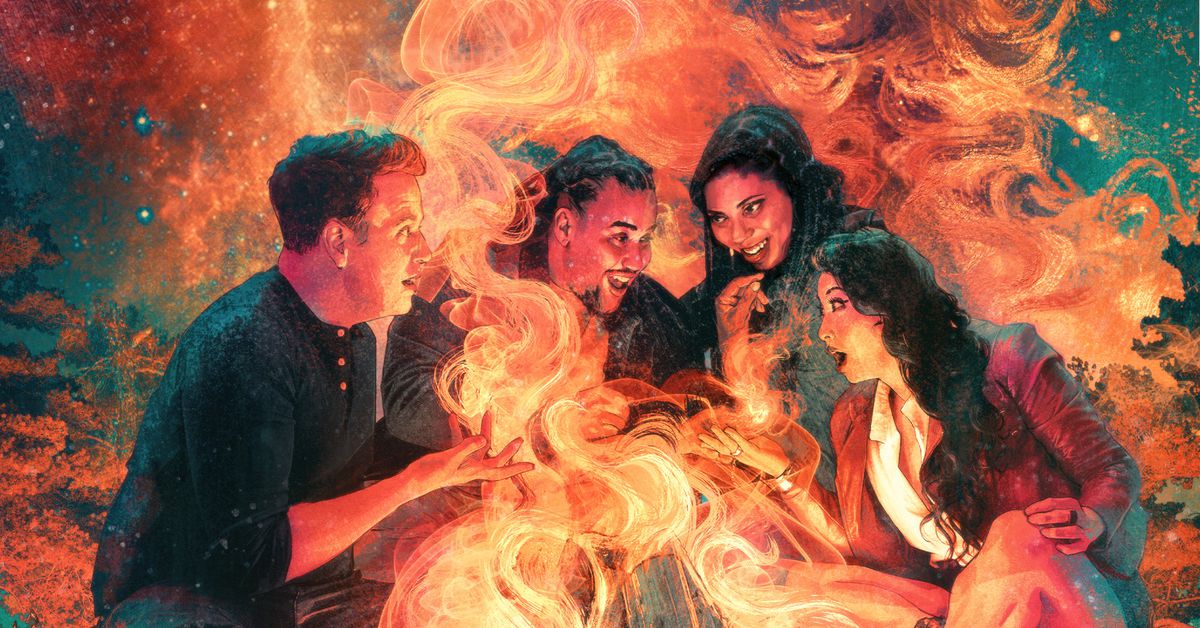 In the first month of 2023, we find that actual play has grown to become an even bigger part of the wider tabletop scene. But the landscape is changing fast. The next iteration of Dungeons & Dragons, dubbed One DnD, is raising more questions than it answers — especially as a possible new Open Gaming License looms. At the same time, publishers like Chaosium, Paradox Interactive, Paizo, Hunters Entertainment, and Free League are courting audiences to their systems through sponsored shows.

What’s on the horizon? Hard to say, honestly. Most announcements stay under wraps until just weeks before they air. Here’s what is currently on our radar this year.

Announced New Year’s Day at the stroke of midnight Eastern time after a viral teaser campaign, Worlds Beyond Number is an artist-owned collaboration between Brennan Lee Mulligan, Aabria Iyengar, Erika Ishii, Lou Wilson, and Taylor Moore. The team includes well-respected veterans of video actual play known for pushing the structures of the form combined with the production talents of Moore, well known for creating sonically interesting podcasts. If you’ve longed to see the omnipresent Iyengar and Ishii seizing the means of production, this is a gift.

The team promises that the multiverse will also include multiple systems, settings, and worlds. The first campaign, The Wizard, the Witch, and the Wild One, will be led by DM Mulligan and is billed as feeling like “the perfect home game of D&D” — a sprawling world to play in. A Patreon will launch Feb. 1 with sneak peeks of the campaign as well as scenes from their Session 0 campaign, the Children’s Adventure. The full 12-hour Children’s Adventure will be Patreon-exclusive and drop alongside the first episode available to the public on March 1. Keep an eye on their site and socials for more information.

In addition to Glass Cannon, Free League is also partnering with AMC Digital Studios to produce a tie-in for The Walking Dead Universe Roleplaying Game. The limited series promises “original events pulled from the series’ writers’ room” developed with former showrunner Scott M. Gimple, and teases possible actor cameos while following new characters who intersect with events in new ways. Keep an eye on Free League’s socials for information as it develops.

Two coteries — one Anarch, one Camarilla — will square up for battle when New York by Night returns for its third season. Departing from LA by Night’s focus on just one side of the conflict between the the status quo and revolution, Jason Carl has chosen to spotlight two sides in successive seasons, while putting them on a collision course. It’s unclear who will be on whose team this time around — or who to root for among these glorious monsters. New episodes will air on the World of Darkness Twitch channel, and keep an eye on World of Darkness’ Twitter for the latest news on the air date.

Meanwhile, D&D programming continues to proliferate — even as Wizards of the Coast increasingly pulls back from direct production. One of the longest-running campaigns in actual play, the all-BIPOC troupe Rivals of Waterdeep returns Feb. 5 for the beginning of the end. The show’s innovative sharing of the DM’s seat and evolving cast has been an incubator for some of the most groundbreaking creators in tabletop. While it’s uncertain what the future holds for the Rivals, it’s well worth tuning in to see them stick the landing. Details to follow on the troupe’s official Twitter account.

This summer, acclaimed DM Jasmine Bhullar (Shikar, Battle for Beyond, Dimension 20’s Coffin Run) will lead DesiQuest, a seven-episode all-Desi D&D actual play drawing deeply from the lore of the Indian subcontinent and fueled by a successful Kickstarter. While Bhullar alone is a major draw, the rest of the cast is equally stellar, including Sandeep Parikh (The Guild), Rekha Shankar (Dimension 20’s The Seven), Anjali Bhimani (Ms. Marvel, Overwatch, Exandria Unlimited), and Omar Najam (Dimension 20’s A Court of Fey and Flowers).

Acquisitions Incorporated, which has experimented with every form of actual play on seemingly every possible platform, is set to transform once again with an upcoming “Series II” Kickstarter. Beyond the return of Mike Krahulik’s Jim Darkmagic, cast and setting have not been announced, but the teaser trailer included the AD&D 2nd edition title Mind Lords of the Last Sea, a book from the postapocalyptic, low-magic survivalist Dark Sun — a setting that hasn’t been heard from since 4th edition.

In the end, what’s most exciting about actual play this year may still be unknown; after all, the best part of the form is the part we don’t see coming.