There are certain rules that one must abide by in order to successfully survive a Scream sequel. For instance, number one: You must stream the original and the other sequels ASAP.

Now that the first trailer for Scream VI has dropped, there’s never been a better time to brush up on this slasher series. Plus, with fan fave Scream 4‘s Kirby Reed (Hayden Panettiere) returning, who knows what other Easter Eggs are in store for diehard fans? Better start studying up now — you’ve got until March 10, when Scream VI hits theaters.

To fully appreciate the journey ahead, eager audiences should plan to set aside roughly 10 hours to binge the first five Scream movies. The first two are groundbreaking slashers that helped repopularize the horror genre after it waned in popularity during the late ’80s. Their tongue-in-cheek approach helped define satirization and criticism of the horror genre for years to come, even if Scream 3 and Scream 4 weren’t quite as good. And as for 2022’s Scream, well, reviews were mixed, but it had enough blood in it to bring the franchise back to life.

Listed in chronological order with some franchise history to boot, here’s every Scream movie and where to watch them. Happy haunting!

Any horror fan worth their Shudder subscription will tell you Scream (1996) changed the game. But there’s more to this slasher’s modern sales pitch than just saying, “It’s important.”

Directed by Wes Craven and written by Kevin Williamson, this whip-smart whodunnit is unflinchingly fun and freaky with a killer cast, script, and style that haven’t lost their collective edge yet. It’s widely considered one of the most unimpeachably re-watchable scary movies ever made. Plus, it cleverly references half a dozen other legendary genre titles, giving those who watch a taste of horror’s best and worst instincts in less than two hours.

Neve Campbell stars as Sidney Prescott, a likable final girl-type navigating a sinister murder plot. When a masked figure with a fondness for horror movies starts attacking suburbanites in a southern California town, Sidney and more of Woodsboro’s residents must fight to survive a night against their mysterious foe. But even Sidney and her friends’ very meta knowledge of horror movie survival can’t save all of them from the villain known as “Ghostface.”

This all-star cast includes Matthew Lillard, Rose McGowan, Skeet Ulrich, Jamie Kennedy, Drew Barrymore, and more ’90s icons. It also introduces franchise favorites David Arquette as rookie cop Dewey Riley and Courteney Cox as crime reporter Gale Weathers. If you’re going to watch just one movie ahead of Scream (2022), then it really ought to be this one. Knife through a door! That’s a “Scream” classic.
Credit: Miramax

Horror expert Randy Meeks may have warned audiences to never say they’d “be right back” in Scream (1996). But the franchise itself made a speedy return with a sequel from Craven and Williamson featuring all of the original’s surviving characters less than a year later.

Scream 2 follows Sidney Prescott to a college in Ohio, where the infamy of her face-off with what turned out to be not one but two Ghostfaces still haunts her. Not only has her ordeal from the original been made into another monosyllabic horror movie series, hysterically named Stab; but an unsolved double homicide at a nearby theater has local police and Gale Weathers thinking copycat killer.

When Dewey arrives on campus to check on Sidney, it’s clear we’re in for another harrowing Ghostface encounter. But it’s how the characters played by Scream newcomers Jerry O’Connell, Sarah Michelle Gellar, Laurie Metcalf, Elise Neal, Timothy Olyphant, Jada Pinkett Smith, and more fare against this new enemy that makes up the meat of the movie.

With a bigger budget and sequels to satirize, Scream 2 delivers everything the first one did well and then some. It’s a bit of a toss up to say which one is better, but you can safely assume that Scream 2 is more violent and more confident in its humor. 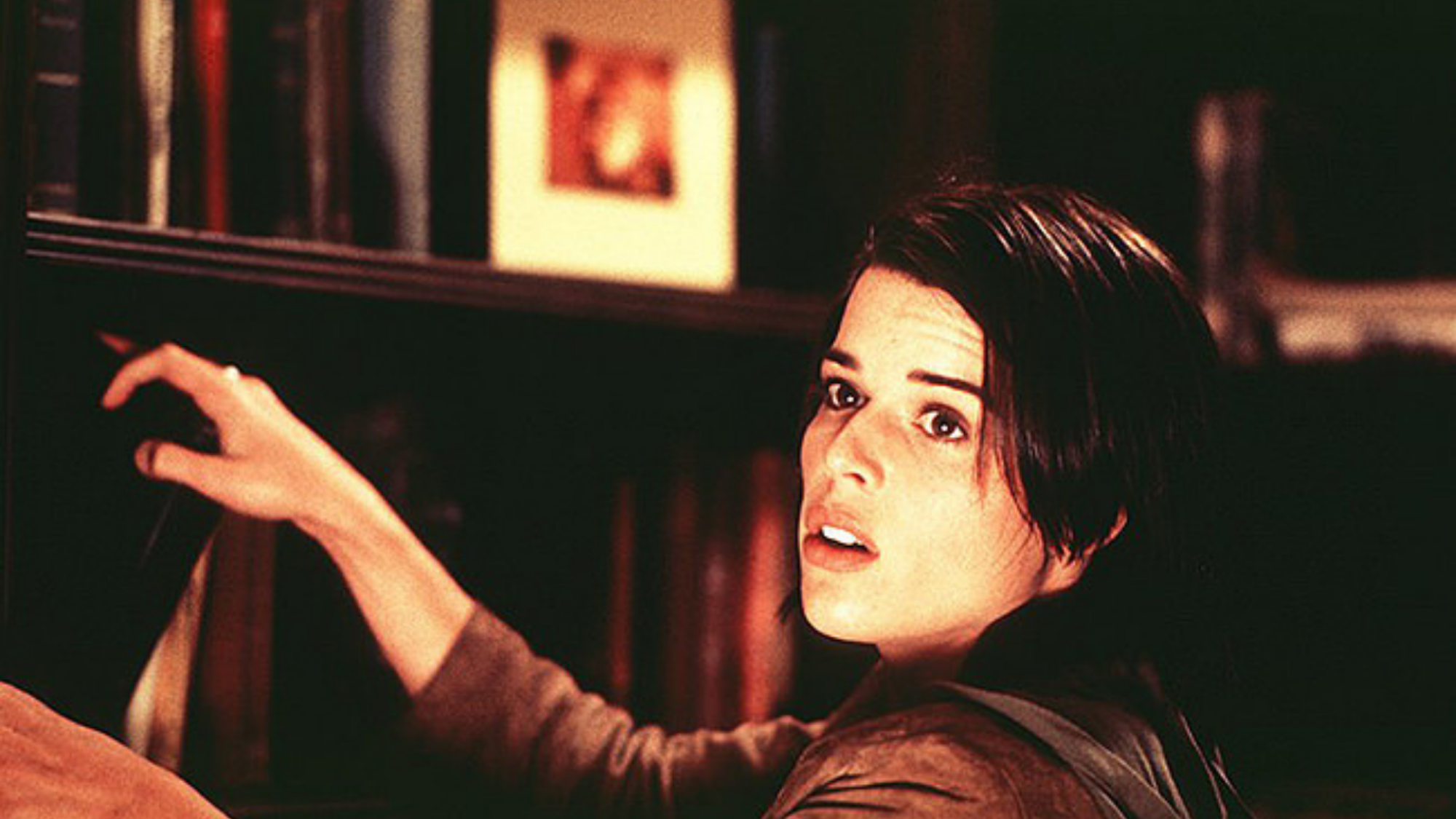 Scream 3 is generally regarded as the series’ low point and with good reason.

Craven returned to direct the third — and, for more than a decade, final — installment in his previously masterful franchise. So many fans placed blame for its bloated story and weighed down pacing on screenwriter Ehren Kruger, who took over for Williamson on this film only. But more than a mediocre plot, Scream 3 lacks the conviction of its predecessors. It doesn’t honor the smarts or successes of the franchise up to that point, fails to exhibit the knowing guidance Craven imbued in the first Scream sequel, and just generally can’t seem to decide what it’s doing. That said, it’s canon.

Back in California, Scream 3 catches up with Sidney who has become a recluse. But her story is tangential to a spree of murders in Hollywood, many of them on the set of the upcoming Stab 3. Wearing the Ghostface disguise and using an impossible voice changer that mimics anyone the user wants (that technology doesn’t exist now, let alone back then), the third antagonist of Scream starts in on a boring slog of mundane kills, tiring chase sequences, and needless retconning that’s just super sloppy.

It’s understandable. Scream 3 had a tortured production, impacted by the national conversation around violent media following the Columbine High School shooting. Still, there are moments in it that are fun in an aughts nostalgia sort of way. Plus, it’s heavy on the comedy and does give us more screen time with Sidney, Dewey, and Gale. JILL. The killer is *right* THERE!!
Credit: Miramax

Reuniting with Craven for the director’s last film before his passing in 2015, original Scream screenwriter Williamson returns for the franchise’s fourth outing. The result is a perfectly passable flick that doesn’t live up to the greatness of the first two, but is worlds better than Scream 3.

Scream 4 is stuffed with red herrings and meta jokes about true crime obsessives and scary movies re-made to death. It’s just as packed with kills and gore, bringing Scream into a new era of terror. Alison Brie, Adam Brody, Marley Shelton, Mary McDonnell, and Anthony Anderson appear in small parts. But it’s once again the original characters’ show, with Sidney, Dewey, and Gale stealing focus throughout. (Seriously, Dewey and Gale are married in this one and it’s very fun.)

You’ll like this sequel if you’ve liked the others, but only watching Scream 4 ahead of Scream (2022) likely doesn’t make practical sense. So get to this one last. Helmed by Ready or Not co-directors Matt Bettinelli-Olpin and Tyler Gillett, and written by James Vanderbilt and Guy Busick, this movie should probably be called Scream 5. But it wasn’t, so here we are.

Scream brings Gale, Dewey, and Sidney back to Woodsboro, alongside a slew of new characters mysteriously related to the original gang. However, this return left Mashable Film Editor Kristy Puchko lukewarm; she wrote, “If you’re going for just one more haunted hayride through Woodsboro, then this Scream (or Scream 5 or 5cream) will satisfy you. But these filmmakers had the chance to make their mark on this franchise by doing something bold and new, and they just didn’t. It’s a shame, because the most shocking sequence is one where they break the slasher standards of nighttime homespun homicide. Regrettably, their finale is far safer.”

MTV’s Scream: The TV Series is a surprisingly fun spinoff from the films that doesn’t include any characters we know but does make ample use of the franchise’s fantastic formula. Seasons 1 and 2 are connected, but Season 3 is totally separate. With 30 episodes to its name, there are plenty of kills and in-jokes you’ll enjoy, even if you’re only passing time before Ghostface’s return this March.

UPDATE: Jan. 19, 2023, 1:51 p.m. EST We have updated this with the latest streaming and rental/purchasing information, as well as more recent information about “Scream” (2022) and “Scream VI.” Additional reporting by Jenni Miller.