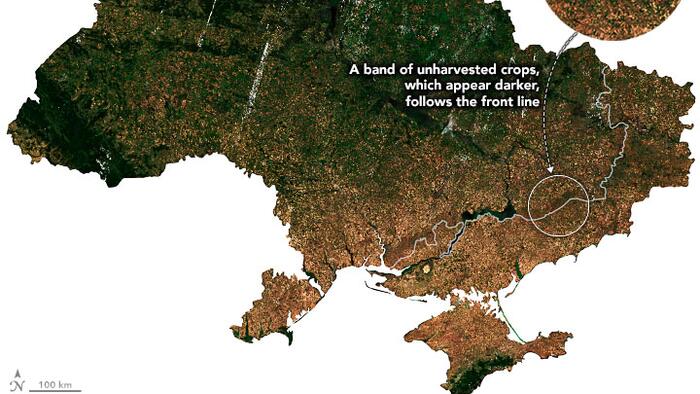 
After much worrying about the effects of war on the country’s food production, Ukraine’s 2022 wheat harvest far exceeded forecasts — but Russia took a billion-dollar share in the occupied east — according to analysis of satellite imagery by NASA Harvest, an international consortium that uses satellite technology to advance food security.

Analysts calculated that farmers throughout Ukraine harvested 26.6 million tons of wheat this year, which is several million tons higher than forecasted.

“That’s down from the previous year’s record harvest of 33 million tons, but it’s close to the five-year average of 27.9 million tons,” said Becker-Reshef.

When Russia launched its invasion, some observers warned that perhaps only 70 to 80% of the winter crop would be harvested by summer’s end. However, NASA Harvest concluded that 94% of the crop was reaped.

With the war obscuring what’s happening on the ground, the satellite analysis offers a means of observing agricultural activity from a safe distance. “The risks on the ground during the war have made the NASA Harvest monitoring system one of the only safe and reliable ways for researchers to track what is happening to crops in Ukraine,” said NASA scientist Sergii Skakun.

Unsurprisingly, analysts found that the unharvested wheat is concentrated along the principal battle lines.

While the analysis is full of good news for the world’s agriculture consumers, it contains a sobering stat for the Ukraine government: A whopping 22% of the wheat was harvested in the Russian-occupied east. That’s about 5.8 million tons worth at least $1 billion, according to NASA Harvest partner Abdolreza Abbassian.

HarvEast, a principal Ukraine agricultural firm, tells Bloomberg that all of the winter crops it planted in Donetsk were harvested and sold off.

“This year, winter wheat gave a very high yield for this region due to favorable weather conditions,” says HarvEast Chief Executive Officer Dmitry Skornyakov.  “Everything that was harvested on our fields was stolen and exported from Ukraine.”

Bloomberg cites an unnamed prosecutor in Switzerland who cautions that selling looted grain may be considered a war crime.