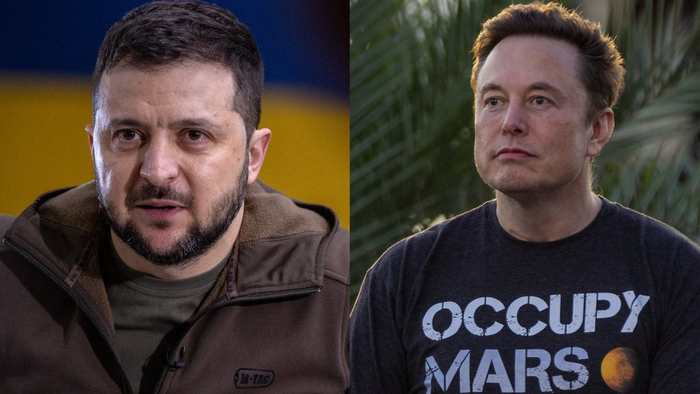 Or rather, it’s looking like this “invitation” is itself another sarcastic jab in response to Musk’s unwavering position that compromise or negotiated settlement must be reached with Russia, in order to avoid unpredictable escalation which could spiral into WWIII. Any talk of battlefield or territorial compromise has ‘outraged’ Kiev.

Zelensky in a Wednesday appearance at The New York Time’s DealBook Summit – an event which funny enough (or sadly) also included a live interview with disgraced FTX founder Sam Bankman-Fried, urged Musk to come and see Ukraine “with your own eyes” in order to understand Russia’s actions there.

“If you want to understand what Russia has done here, come to Ukraine and you will see this with your own eyes without any extra words,” Zelensky said during the discussion. “And after that, you will tell us how to end this war, who started it and when we can end it.”

Zelensky also joined other Ukrainian officials in suggesting that Musk has been “influence” by the Kremlin, a baseless charge that was floated by some Western pundits after Musk in early October held a “Russia-Ukraine Peace” Twitter poll.

According to more from The New York Times:

During the interview with Andrew Ross Sorkin of The Times, the video link cut out, and when it resumed, Mr. Sorkin joked that Mr. Musk might have somehow cut the connection.

“I hear you,” Mr. Zelensky said. “Most important is that Mr. Musk will hear us.”

Mr. Zelensky said the risk that Mr. Putin would use nuclear weapons was not his biggest fear, and that it shouldn’t be the biggest fear of the West.

“I don’t think he will use nuclear weapons,” Mr. Zelensky said. “This is my opinion.”

As for Musk’s offending original sin, he had encouraged his over 100 million Twitter followers to vote on whether they think negotiated settlement to the war is a good idea or not, proposing a “redo” of referendums for the four annexed regions of eastern Ukraine which Vladimir Putin declared part of the Russian Federation last week. It would also be conditioned on Ukraine remaining neutral vis-a-vis future NATO membership.

Of course, talk of territorial concessions outraged Ukraine officials and their supporters in the West, with an avalanche of blue check mainstream media pundits pouncing amid cries of Musk supposedly being ‘pro-Kremlin’. Soon after, Musk questioned whether SpaceX will continue providing Starlink for free to Ukrainian forces, unleashing more controversy.